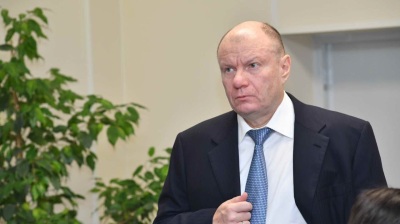 One of Russia's richest oligarchs Vladimir Potanin is getting back into the banking business as he picks up several distressed banking assets. / wiki
By bne IntelliNews May 1, 2022

Russian oligarch Vladimir Potanin's Interros will acquire a 35% stake in bank TCS Group that operates under the Tinkoff brand from the family trust of its founder Oleg Tinkov. Potanin is one of Russia’s richest oligarchs and is rebuilding his banking empire. The Tinkoff Bank deal has already been approved by the Central Bank of Russia (CBR), RBC business portal reported on May 2.

Potanin, CEO and shareholder of metals major Norilsk Nickel and who is not under Western sanctions, will emerge as a major banking player in post-invasion Russian, as his Interros is also acquiring Russia’s 11th largest bank Rosbank, fully owned by French Société Générale.

And he picked up one more piece to add to his burgeoning banking empire with the acquisition of payment processing company UCS (United Card Services) for an undisclosed amount it was reported on May 2, with the deal approved by the Federal Antimonopoly Service (FAS) and the Central Bank of Russia (CBR).

Interros said it acquired UCS to “continue developing the banking business”. UCS is the fifth largest card payment company globally as of 2020, with over $16.4bn payments processed (as compared to $30bn annually by Russia’s largest bank Sberbank).

The bank asset acquisition deals represent a return to banking for Potanin, who made his first fortune in the 1990s with Uneximbank that speculated against the ruble during the years of hyperinflation and became a cash cow making Potanin one of the richest men in the country.

Potanin use his enormous cash pile to buy Norilsk Nickel in the now notorious fixed loans-for-shares deal in 1995-96 that made him a billionaire all over again.

Thanks to the importance of Norilsk Nickel to the international metals market and the key role the company plays in supplying PGM (platinum group metals) to the electric vehicles (EV) business, Potanin and his companies have so far escaped Western sanctions.

In the 1998 financial crisis Uneximbank went bust but Potanin moved all the good assets out into Rosbank that was a minor bank in Potanin’s holdings that took over his banking business. At the end of that decade Potanin sold Rosbank to Société Générale, which used it as the basis of building up its Russian retail business.

As covered in detail by bne IntelliNews, Tinkov was one of the prominent oligarchs and businessmen sanctioned by the UK, and lost his billionaire status after his fortune plummeted by more than $5bn in a month. His TCS Group, former investor darling operating Russia's only pure online bank Tinkoff, was listed on the London Stock Exchange, with a capitalisation topping $20bn in 2021.

After Tinkov published a sharp foul-mouthed critique of the "insane war" in Ukraine on his social media, Tinkoff Bank immediately distanced itself from its founder and Tinkov reportedly started to look for a quick exit from the asset.

The amount of the deal is undisclosed, but given that Tinkov rushed the deal under pressure, Potanin is likely to have bought the asset at a considerable discount. The 35% stake in TCS was valued at about $2.4bn in Moscow (the trading of its receipts was suspended in London), but Kommersant and RBC sources claimed that Tinkov could get a maximum of $300mn-$350mn for the deal, while less than two years ago Tinkoff received takeover bids worth over $5bn.

Previous reports claimed that Société Générale  had rushed to sell Rosbank to Potanin's Interros for as little as 0.2-0.3x of capital.

The analysts surveyed by RBC believe that Interros could merge Tinkoff and Rosbank, creating a synergy between the former’s online business and the latter’s branch network. Tinkoff previously also said it would rebrand to distance itself from Tinkov.

Notably, Potanin is one of the few Russian oligarchs who is not under heavy Western sanctions and has the cash available to buy cheap discounted assets at home. Analysts surveyed by Kommersant previously argued that Interros and Potanin are not yet subject to wider EU sanctions due to Norilsk Nickel metals being the major supplier of nickel and palladium for the global automotive industry (Interros controls 35.9% stake in the company, of which Potanin is also the CEO).

According to Potanin, Interros is a long-term financial investor in Tinkoff and is interested in the bank continuing to occupy a “leading position in the Russian banking market”.

"I am proud to have built the best bank in the country from scratch with my team. The consensus in our industry is that it is the best digital bank in the world and founded in Russia. Now it is time to retire and take care of my health and family," Tinkov commented on his exit from Tinkoff.

Tinkov is a former Russian entrepreneurial class superstar. He founded and sold dumplings producer Daria and beer brewing business Tinkoff before moving into banking in 2006. Until 2021 Tinkov controlled 84% of TCS, but first started to sell out and then decentralise his stake following being diagnosed with leukemia and settling tax fraud accusations with the IRS.

Previously Tinkov had already tried to sell TCS. In 2020 Yandex called off the $5.5bn deal to acquire Tinkoff Bank, although the market and the analysts were inspired by a possible merger, reportedly because the price was too low. The bank was also reportedly eyed by MTS Bank, subsidiary of MTS mobile major, controlled by AFK Sistema multi-industry investment conglomerate of now sanctioned Vladimir Evtushenkov.

Prior to Russia's military invasion of Ukraine, in 2021 TCS revealed its 2023 strategy, with a focus on further customer growth cross-sell, and a deep dive into technology, targeting $1bn profit and 30% ROE by 2023, which was welcomed by both institutional and retail investors. TCS is also targeting a strong trend of retail investors flocking to the equity market in Russia, and has most recently unveiled its sustainability agenda.

The strategy is now in question. In April 2022 Oliver Hughes, the financier who has helped to build Tinkoff Bank into a global financial powerhouse, relocated from Moscow to Dubai as part of a massive exodus of Russian talent. Hughes and Pavel Fedorov, his co-chief executive, left Tinkoff in April to launch a fintech startup focusing on emerging markets in Southeast Asia.