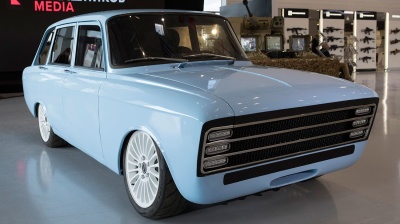 The climate crisis induced stricter emission rules for cars, ballooning electric car sales and the lack of palladium mean prices could soar in 2020.
By Ben Aris in Berlin November 18, 2019

Analysts at VTB Capital (VTBC) have increased the target price of Norilsk Nickel (NorNik) shares by a quarter (25%) in anticipation of a spike in the prices for nickel, palladium and other platinum group metals (PGM) next year as countries around the world scramble to cut CO2 emissions in what is shaping up to be a super-climate year.

“There is a widening gap between global emission targets and reality,” VTBC said in a note. “We believe that in order to catch up with targets, the industry will have to accelerate electric vehicle (EV) adoption as well as significantly increase palladium loadings in petrol internal combustion engine (ICE) cars. This would drive demand for palladium, nickel and copper up further, just as inventories of all three are low.”

NorNik is the biggest producer in the world of nickel and PGM metals that are essential components in catalytic converters that reduce the amount of CO2 cars produce as exhaust fumes. With ever stricter limits on the amount of CO2 a car can produce, the role of the PGMs has become ever more important.

The metals are also used in battery production so demand for nickel and PGMs is only set to increase as the effort to cut CO2 is expected to climb, but the stocks of these metals is already low.

“Supply response or substitution will take years to materialise, we believe. We raise our 12-month Target Price for Norilsk Nickel 25% to $34, as we expect the company to enjoy higher prices supplying this disrupted market. As this implies an estimated total return (ETR) of 37%, we reiterate our Buy,” VTBC said in a note. NorNik shares were trading at $24.90 on November 15.

Next year will be crunch time for the planet. The world has to reach peak CO2 production next year and the levels of CO2 have to start falling in 2020 if a global climate disaster is going to be avoided, the Institute of International Finance (IIF) said in a note this week.

But at the moment we are on course to fail and miss the targets. Global CO2 emissions from transport grew 2% in 2018 – the second year in a row – yet government limits are reduced by 10% every two years in several key regions.

“The pollution generated from older generation ICE cars exceeds the limits set by new European and Chinese standards and road tests by 4-5x,” VTBC said. That means to meet the challenge governments will start cracking down more aggressively on old cars and push populations to switch to EVs.

Tellingly, billionaire Elon Musk announced he will build a “Gigafactory” Tesla electric car factory in Berlin next year, the first one outside of the US. Volkswagen has made the most aggressive move of the traditional auto companies into electric vehicles, announcing plans to invest €30bn to electrify its entire product line up over the next four years.

Europe needs an increase of 23% for EVs in the sales mix to meet its 2021 CO2 target. Global EV sales in 2018 were up 68% to almost 2mn, 2.1% of light vehicle sales, as the public push for CO2-free transport exceeded expectations, reports VTBC.

“We expect the 2019F dip in sales to be transitionary, while, with faster battery technology evolution, we now not only see nickel demand from EVs rising to 594kt in 2025F, but also an additional 200kt demand from other EVs, such as electric two-wheelers (from push scooters to motorbikes) and e-buses, mostly in Asia,” said VTBC.

Increasingly stringent emission rules will only increase the demand for palladium, which can convert car exhaust gas from CO2 into harmless water and oxygen and the demand has already been pushed up by new rules in Asia and Europe.

“Wider and faster application of China 6 than we had expected, as well as stricter laboratory and road tests under Euro 6d-TEMP, resulted in a 15-20% increase in palladium loadings in gasoline cars in 2019F,” reports VBTC. “We expect a busy pipeline of further ICE cars emissions tightening regulations until 2023F is to support 6.2% autocatalysts demand compound average growth rate (CAGR).”

At the same time, the metals producers are not ready for a rapid uptick in demand as inventories are low. The demand for nickel in particular has been increased after Indonesia, a major producer, brought forward a ban on exports to October.

Is Russia’s healthcare system up to dealing with the coronavirus?

Russia's National Welfare Fund steps up again to $12.2bn, or 11% of GDP, in March
IIF forecasts a contraction of -1.4% in CEE, -1.3% in Russia, but Turkish growth remains in the black in 2020
Is Russia’s healthcare system up to dealing with the coronavirus?

With the predominance of oil and gas in Russia’s economy the pipe-making business is a big one. ChelPipe is the market leader and is now considering an IPO.

Finance minister accused of just “dropping in from outer space” for sticking to his targets. Lira continues to crumble as analysts slash growth forecasts.

Tech startup Eligma has already popularised cryptocurrency payments in Slovenia. Now the company is keeping its operations going to enable contactless payments for groceries and other essentials.

Just how painful would a sovereign debt default be for Ukraine?
1 day ago
Turkmenistan: Unjust deserts
2 days ago
Russian pipemaker ChelPipe getting ready for IPO
7 days ago
TURKEY INSIGHT: How bad a pandemic hit to GDP must country brace for?
4 days ago
Keep calm and carry crypto
6 days ago