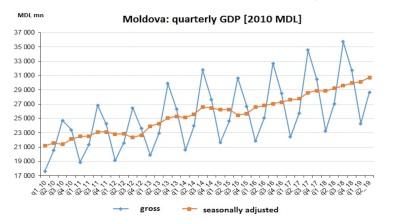 By Iulian Ernst in Bucharest September 17, 2019

In the whole of H1, the average GDP growth was 5.2% y/y, with the construction sector contributing 2.2pp.

The performance was achieved despite the political crisis that ended in June, after the general elections in February.

The record growth in Q2 comes after the 4.4% advance in Q1 and overall 4.0% average growth rate in 2018. The outlook remains positive, after the formation of the new government that already resumed the programmes with the International Monetary Fund (IMF) and the European Union expected to unlock more tranches of the financing attached.

When reaching a staff-level agreement with Moldova in July, the IMF projected the country’s GDP growth would ease to 3.5% from 4% in 2018 but given the developments an upward revision is likely.

On the utilisation side, gross fixed capital formation was the main growth driver. In volume terms, it increased by 26.1% y/y and contributed 6.9pp to the overall growth of demand. Notably, consumption increased by only 1.7% y/y and contributed 1.7pp to the growth of demand. Internal demand strengthened so much more than GDP that the net imports accounted for 22% of it.

Russia’s gross international reserves (GIR) topped $557.5bn on January 10, according to the Central Bank of Russia (CBR), surpassing the previous all-time high in 2008.