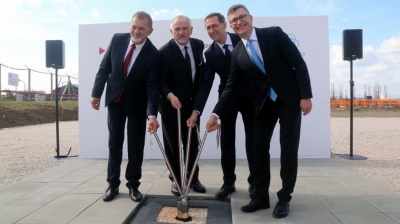 Hungarian oil and gas company MOL laid the cornerstone of a €1.2bn petrochemicals plant in Tiszaujvaros, northeast Hungary, on September 27 with a capacity to produce around 200,000 tonnes of polyols per year.

The government is supporting the investment with a €131mn grant, Finance Minister Mihaly Varga said at the ceremony.

With the investment, MOL is adding polyols, an essential component of polyurethane which goes into furniture, building materials and car parts, to the production palette at its petrochemicals unit in Tiszaujvaros.

MOL chairman-CEO Zsolt Hernadi said the plant would be completed by 2021 and employ 200 people.

MOL will be the only company in Hungary and the entire Central and Eastern European region with an integrated value chain from crude oil extraction to the production of polyether polyol, he added.

The Tiszaújváros complex will produce polyol using efficient and environmentally friendly technologies such as the HPPO process (propylene oxide from hydrogen peroxide) developed by thyssenkrupp and Evonik.

One of the cornerstones of MOL Group's 2030 - Enter Tomorrow strategy is to expand the company’s petrochemicals value chain and to produce higher-added value product. The polyol plant and the previously opened synthetic rubber plant are the milestones of this strategy.

The synthetic rubber plant of MOL Group and the Japanese JSR Corporation produces 60,000 tonnes of solution polymerisation styrene-butadiene rubber (S-SBR), a highly sought after chemical product globally. The most important feedstock of S-SBR is butadiene, which is produced by MOL at an adjacent plant commissioned in 2015.

In other news related to MOL, the oil company said it signed a €570mn revolving credit agreement with 14 banking groups. At the same time, it cancelled the remaining $620mn of credit available under a $1.55bn credit line it signed for on October 30, 2014.

The transaction was coordinated by BNP Paribas and UniCredit Bank Hungary, with Erste Group Bank AG acting as facility agent. The tenor of the facility is five years with a 1+1-year extension option. It can be drawn in euros and in dollars. The initial margin of the facility is 70bp.