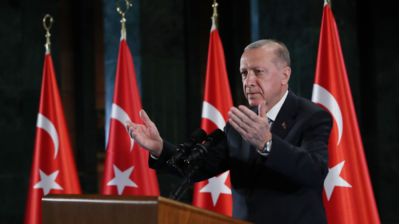 Nato officials spent the weekend briefing media that they believed overcoming Turkish President Recep Tayyip Erdogan’s opposition to Finland and Sweden joining the defence bloc was far from an insurmountable task—but on Monday May 17, Erdogan quickly disabused them of that idea, declaring that planned Swedish and Finnish delegations should not bother coming to Ankara to convince Turkey to approve their Nato bids.

Turkey surprised its Nato allies at the end of last week by saying it would not view the applications from Sweden and Finland positively. It mainly pointed to their history of hosting members of largely Kurdish groups that Ankara deems terrorists. The situation is a big problem for Nato given that any one of its members is entitled to veto a proposed expansion of the alliance.

In a news conference on Monday, Erdogan called Sweden a "hatchery" for terrorist organisations, reiterating a previous claim that it even has terrorists in its parliament.

"Neither of these countries have a clear, open attitude towards terrorist organisations," Erdogan said. "How can we trust them?"

Referring to the expected delegations, he added: "They are coming to Turkey on Monday. Are they coming to convince us? Excuse me but they should not tire themselves."

Turkish state broadcaster TRT Haber noted on Monday that Sweden and Finland had not granted approval for the repatriation of 33 people that Turkey has previously requested.

Erdogan also mentioned that Turkey would oppose Nato bids from those who have imposed sanctions on it. Sweden and Finland have joined in arms export embargoes on Turkey, brought in after its Syria incursion in 2019 to pursue Kurdish militants.

One obstacle to persuading Erdogan to change his mind on admitting Sweden and Finland into Nato—and thus presenting Russia with a stronger and indivisible defence bloc in response to its aggression in Ukraine—is that the Turkish leader of nearly two decades must go to the polls to seek re-election by June 2023 at the latest. Given the wretched state of Turkey’s economy, Erdogan is doing badly in opinion polls and he will not want to show any clear weakness on questions that concern the more nationalist of his supporters as the election countdown picks up.

However, Stefanie Babst, former Nato deputy assistant secretary-general for public diplomacy and an analyst at the European Leadership Network, told Al Jazeera that “Turkey will, in the end, align with the consensus and welcome Finland and Sweden as new members”.

“In the meantime, they will try to bargain in negotiations in order to get some returns,” she said.