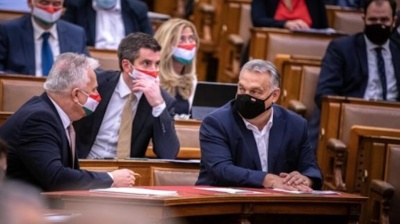 Hungary’s opposition parties have called on Prime Minister Viktor Orban to withdraw a set of proposals to amend the constitution and election rules submitted to the parliament on November 10, just after lawmakers overwhelmingly supported extending the state of emergency and new curfew restrictions. There will be no obstacles to passing legislation as the ruling conservative-nationalist Fidesz party holds a supermajority.

One of the constitutional amendments would ban adoption by same-sex couples. The proposed amendment would specify that "the mother is a woman, the father is a man" and permit only married couples to adopt children.

Same-sex marriage is illegal in Hungary, but adoption has been possible if one partner applies on their own. Under the latest proposed amendment, single people could only adopt with special permission from the minister in charge of family affairs.

The proposal seeks to strengthen protections of families and children, ensuring that all children are brought up according to Christian values appropriate to their gender of birth, Justice Minister Judit Varga said.

LGBTQ groups say the legislation severely limits legal rights and goes against basic international and European human rights. It was deliberately drafted at a time when mass protests are not allowed, they added.

At the end of March the parliament approved legislation that gave state of emergency powers to Orban without a time limit. One of the first decisions of the government then was to issue a decree that made it impossible for transgender people to legally change their gender.

Another controversial proposed amendment involves election related-bills that opposition parties say will be unfavourable for them.

"A party may set up a party list only if it has nominated candidates in at least fifty single-member constituencies located in at least nine counties and the capital," according to the draft, submitted by deputy Prime Minister Zsolt Semjen. This would almost double the minimum number from the original 27.

The government said it wanted to crack down on bogus parties, which pop up just before elections to cash in on lucrative campaign subsidies. Surprisingly many of them manage to field candidates in lots of constituencies or even field a national list.

Analysts point out that they are not just formed to siphon campaign money, but they actively help Hungary's illiberal strongman as fake parties tend to soak up many discontented voters and take votes away from legitimate opposition parties.

Over the years, the Orban government has changed the election rules. It introduced a single-round system and redrew districts to favour the governing party.

The National Assembly has 199 members; 106 of them are elected in single-member electoral districts and the remaining 93 come from national party lists.

The latest proposal narrows the possibilities of opposition parties, which have begun to work closely together to fight Fidesz in the crucial 2022 elections.

In theory, they agreed to field a single candidate in all 106 constituencies to stand a chance against the ruling party, but they remain divided about forming a joint national list.

Fidesz has made it clear it can change the rules at any time without any prior consultation, political analysts said, adding that in mature democracies it is not customary to amend election rules without a broad consensus, especially at a time of crisis.

Hungary's constitution stipulates that election laws can not be changed a year before elections.

Opposition parties said that the prime minister was getting "desperate". "This just goes to show that Orban does not even feel safe in an election system he designed for himself," according to a statement by the opposition Socialists, Jobbik, Democratic Coalition, LMP, Parbeszed and Momentum.

Another constitutional amendment from Fidesz would redefine the definition of public money. The official justification claims that the new definition will help to develop a uniform practice among constitutional bodies on what constitutes public money as they were often inconsequential in their former verdicts.

The amendment, if approved would make it difficult for politicians, NGOs or the press to learn about the spending of foundations connected to the Hungarian National Bank (MNB), or the TAO schemes, which allowed tax deductions for companies that sponsor sports clubs. Over the years some HUF700bn (€1.9bn) of public money went to sports clubs “outside of the budget”.

Pallas Athene foundations set up by the MNB for long refused to provide data about their finances claiming that it was not public money they managed.

The new regulation could ultimately enable state-owned companies and state-financed foundations to easily hide their finances, arguing that the funds they had been endowed are not public money.

Fidesz would make amending these rules difficult in case of a regime change as a two-thirds majority would be required to overturn it.  Opposition parties say the ruling party wants to secure funds in case of an election loss in 2022.