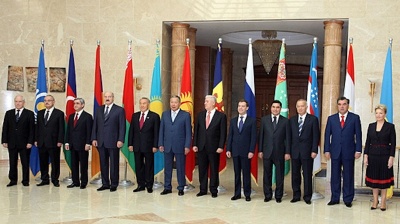 Commonwealth of Independent States lineup. New research shows that the more overweight the politicians in a government from the former Soviet Union are, the more likely that government is to be corrupt.
By bne IntelliNews July 28, 2020

The victims of Central Asia’s notoriously rapacious traffic cops – pulled over for an inspection that would inevitably end with paying a fine – would often joke wryly about the policemen’s big bellies, speculating that they were inventing a traffic offence because they were hungry for their next meal.

At the higher echelons of government there isn’t the same direct connection between being corrupt and eating well. Yet a study by Pavlo Blavatskyy, professor of economics at Montpellier Business School, comes to the surprising conclusion that the more overweight the politicians in a government from the former Soviet Union are, the more likely that government is to be corrupt.

The study is based on 299 facial images of 2017 cabinet ministers from the 15 post-Soviet states. The researchers used a computer vision algorithm to estimate their body-mass index (BMI).

It finds a “striking” correlation between the median estimated body-mass index of cabinet ministers in governments from the region and measures of corruption such as Transparency International’s Corruption Perceptions Index, the World Bank’s Control of Corruption worldwide governance indictor and the Index of Public Integrity. 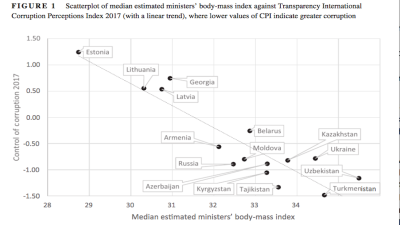 Blavatskyy says he picked the former Soviet region because corruption is perceived to be a significant problem there. Estimated BMI for ministers in the region is also “generally quite high”.

“According to all conventional measures of corruption, the least corrupt post-Soviet states are three Baltic countries (Estonia, Lithuania and Latvia) and Georgia. These are also the countries with the lowest median estimated ministers’ body-mass index. According to the conventional measures of corruption, the most corrupt post-Soviet states are three Central Asian countries: Turkmenistan, Tajikistan and Uzbekistan. The three post-Soviet states with the highest median estimated ministers’ body-mass index are Uzbekistan, Turkmenistan and Ukraine,” the research revealed.

Speculating on why Ukraine had some of the plumpest ministers but was not seen as among the most corrupt states, the reported noted that some of the indicators of corruption are based on the perceptions of foreign experts. “Foreign experts may underestimate the level of grand political corruption in Ukraine (a country with relatively less corrupt neighbours) and they may overestimate corruption in [the] case of Tajikistan (a country with relatively more corrupt neighbours),” it suggests.

It also looks at whether the correlation could be because of the national diet or state of health of the population. On the contrary, says the report, “Countries with relatively more obese cabinet ministers tend to have a relatively less overweight population. Ironically, this suggests that there might be a health benefit to grand political corruption.”

Further backing up the theory, Blavatskyy notes the change in the median BMI of Armenian cabinet ministers after the Velvet Revolution of 2018. The estimated BMI of ministers in the post-revolution government of Nikol Pashinian, which came to power on a wave of anti-corruption protests, is lower than for the 2017 government. “Thus, according to our measure, the Armenian velvet revolution lowered grand political corruption,” says the report.

“This result suggests that physical characteristics of politicians such as their body-mass index can be used as proxy variables for political corruption when the latter are not available, for instance at a very local level,” wrote Blavatskyy.

“When actual expenditures in the upper echelons of the government are unobservable and/or under-reported, it is useful to find proxy variables that are highly correlated with conventional measures of grand political corruption.”