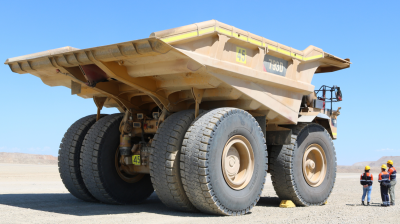 New destinations: the company's $900mn purchase of the undeveloped Baimskaya mine in Russia surprised shareholders.
By Kanat Shaku in Almaty October 29, 2020

The two largest shareholders in London-listed Kazakh copper miner KAZ Minerals, chairman Oleg Novachuk and director Vladimir Kim, have announced a £3bn all-cash buyout offer that would take the company private after 15 years on the LSE. The offer is for the 61% of shares in the company they do not already own, KAZ Minerals said on October 28.

The shares rose by 10% on October 28 to £626 per share after the announcement—the share price in KAZ Minerals has risen 15% in the year to date. Copper prices this year have gained 10% to date thanks to a demand recovery in China.

The buyout will take place via the Nova Resources consortium created by the two shareholders for the purpose. Kim and Novachuk aim to cover the deal via a loan from Russian investment bank VTB, Interfax news agency reported.

The move to take KAZ Minerals private echoes earlier deals at Vedanta Resources and another Kazakh company, Eurasian Natural Resources Corp, which both listed during the 2000s commodity boom. While they’ve all left the exchange for different reasons, London investors ultimately no longer valued the companies as highly as their biggest owners did, Bloomberg noted.

“The increasing ESG [environmental, social and governance] scrutiny from investors hasn’t helped developing market resource companies,” said Grant Sporre, a Bloomberg Intelligence analyst. “Many investors now see the risk-reward balance skewed to the downside, and in a sense it reflects the de-globalization sentiment at the moment.”

KAZ Minerals and its subsidiaries engage in mining and processing copper and other metals in Kazakhstan and Kyrgyzstan. The company operates the Aktogay and Bozshakol open pit copper mines in Kazakhstan along with three underground mines. It is also developing the Bozymchak copper-gold mine in Kyrgyzstan. Moreover, the firm is developing the Baimskaya copper deposit in Russia’s Chukotka autonomous region.

‘Rationale for the offer’

Kaz Minerals said an independent committee of the board was recommending shareholders accept the offer. Novachuk explained the rationale for the offer as a result of the company’s “higher risk, capital intensive strategy”, which may be “misaligned with the preference of many investors in the mining sector.” Nova Resources also said separately that the development of the Baimskaya copper mine in Russia, bought by KAZ Minerals in 2018, “would be best undertaken away from public markets as a private company”.

"In reaching its decision to recommend the terms of the acquisition, the Independent Committee of Kaz Minerals has taken account of both the long-term potential value of Kaz Minerals and the risks inherent in achieving this value," KAZ Minerals said.

The $900mn purchase of the undeveloped Baimskaya mine surprised shareholders, leading to a sell-off in the stock after the announcement of the purchase. The mine’s development is set to cost $7bn and take seven years to carry out. KAZ Minerals referred to the mine as one of the world’s biggest undeveloped copper assets.

“Mr Kim and I believe that Kaz Minerals has made notable progress as a public company since listing on the London Stock Exchange in 2005,” Novachuk said. “However, driven by the current market uncertainty and the corporate circumstances of sequential development projects, we believe that Kaz Minerals’ long-term interests would be best served as a private company.”

BCS Global Markets said in a note on October 29 that it sees a probability that court approval may fail. BCS posited that this could lead to the takeover offer, resulting in a new higher offer price than the current offer—positive for the company share price and minorities.

“We maintain a ‘Hold’ recommendation on KAZ Minerals (12MF TP of GBP 6.8/share), despite the offer at GBP 6.4/share, which we consider to be fair at current copper and gold prices. The call reflects a reasonable possibility that court approval may fail, resulting in higher offers on the takeover route, BCS said.

Senior analyst at Sova Capital, Yuri Vlasov, said in a note that Sova recommends “KAZ Minerals shareholders accept the buyout offer of GBp 640/share, as it is close to our TP of GBp 670/share”.

“The decision to take the company private is likely linked to the $7bn development of Baimskaya, we consider,” Vlasov added.

“The buyout is subject to antitrust and regulatory approval, and the completion of any deal is not expected until 1H21,” he said.