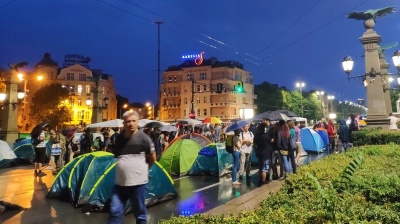 A standoff between police and protesters at barricades blocking key roads in Sofia marked a full month of mass rallies in Bulgaria, with protesters demanding the resignations of the government of Prime Minister Boyko Borissov and chief prosecutor Ivan Geshev.

Hundreds of thousands of Bulgarians across the country and in several other states have been protesting for 32 days, angered by widespread corruption and collusion between politicians and controversial businessmen.

After around 20 days of rallies, protesters decided to block key roads in Sofia, setting up tent camps. Similar blockades were made in the following days in several other big cities in Bulgaria, while five people decided to start hunger strikes.

On August 7, the police removed the tent camps, arresting some of the protesters and summoning others for interrogation.

However, the same evening August 7, more protesters set the camps up again and built barricades to prevent another police attack. The police responded with a pledge to remove the tents on the next day.

In turn, the protesters responded with a bigger presence in the camps and instructions to prevent any violence and not to give the police any reason to attack. This stopped the planned removal of tent camps on the night of August 8, but it is expected that gendarmery could intervene soon.

At the same time, groups of people are blocking key motorways, driving in columns at the minimum allowed speed of 50 km/h. On August 9, the police stopped one of those groups for document check. According to participants, the police held them for two hours.

The police claimed they had to remove the tents as blocking key roads is banned under the law on road traffic. On the other hand, lawyers claim that the constitution allows this form of protest and that the police violated the constitutional rights of the protesters.

“The road traffic law has annulled the constitution,” Plamena Nikolova, a supporter of the protests, wrote on Facebook.

The police claim they acted after more than 400 people filed complaints over the blocked roads in Sofia, which provoked heated debates on social media over on what is more important for Bulgarians: to get back free access to roads or to get back control over the state and restore the rule of law.

While some believe blocking roads went beyond what was acceptable, others argue this is a tiny price for getting back the state that has been captured by the mafia.

Valeri Simeonov, the leader of the National Front for Salvation of Bulgaria (NFSB) – one of the junior coalition partners of the ruling Gerb party – said in an interview for Nova TV the decision for removal of tent camps was taken at a coalition council a day earlier.

“The protests very seriously violate the law and for 30 days are limiting the right on free movement of citizens in many Bulgarian cities,” Simeonov said.

He claimed that should the tents be left this could have led to a civil war.

In the face of the long-standing protests, members of the ruling coalition are losing their tempers. On August 9, Deputy Prime Minister Krassimir Karakachanov, the leader of the VMRO party, another of Gerb’s far-right junior coalition partners, said the protests might lead to escalation and clashes and accused protesters of being “sorosoids” and “genders”. Billionaire philanthropist George Soros is a popular hate figure among right-wag governments in the region. Meanwhile, the word ‘gender’ has been used by far-right politicians with a negative connotation, meaning a “third gender” as they dubbed gay and trans gender people.

“It is not possible to ruin the state in the name of this [goal] – few sorosoid NGOs and [little] parties that are not in parliament – to seize power. And in the name of what? To bring me gay marriages and create for me a gender republic,” public broadcaster BNR quoted Karakachanov as saying.

Far-right parties in Bulgaria widely use accusations that liberal or democratic NGOs and political parties want to impose gay marriages by force and allow a “third gender” in their pre-election rhetoric as part of the efforts to gain more support.

According to recent poll, VMRO as well Simeonov’s NFSB almost certainly will not pass the 3% threshold and enter parliament in the next general election.

To resign or not to resign

While the protests seem far from calming down, Borissov has given signals that he is ready to resign immediately. He said that at a gathering of Gerb’s members, suggesting the government could continue without him.

Deputy Prime Minister Tomislav Donchev also suggested the government could resign at the end of September, however, several hours later Simeonov announced the government will serve its full mandate as decided at a coalition council.

Many saw in this a proof that Borissov is weak and dependent on others, suggesting that his resignation can only be allowed by Ahmed Dogan – the chairman of honour of the ethnic-Turk Movement for Rights and Freedoms (DPS) and DPS MP and businessman Delyan Peevski, who have become symbols of corruption.

Borissov and his ruling coalition are accused of being in secret coalition with the DPS and changing laws in favour of the party and its leader.

Despite Simeonov’s statement, on August 9 Borissov gave a new signal it is time for him to take big decisions. He posted a picture on Facebook with his grandchildren, writing that home is where they are.

“It is time for their smiles and my decisions,” Borissov says.

Geshev, whose resignation is also demanded by the protesters, has repeatedly said he will not step down.