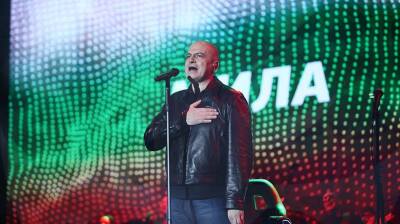 / Slavi Trifonov / There Are Such People
By Denitsa Koseva in Sofia March 8, 2021

Polls indicate the April 4 general election in Bulgaria will result in a very fragmented parliament in which both of the two main parties — Prime Minister Boyko Borissov’s Gerb and the Bulgarian Socialist Party (BSP) — will face significant challenges in forming a new ruling majority.

This would put popular showman turned politician Slavi Trifonov, whose party There Are Such People is currently third in the polls, in kingmaker position. However, as Trifonov has already ruled out a coalition with the “systemic” parties, namely Gerb, the BSP and the ethnic-Turk Movement for Rights and Freedoms (DPS), according to analysis from Teneo Intelligence he would most likely try to put together a broad technocratic coalition.

Trifonov, who has blurred the boundaries between showbiz and politics since the fall of communism when his show “Cuckoo” lampooned Bulgaria’s leaders, has long been expected to step into the political arena.

The showman, actor, singer, and player of several musical instruments is already a household name in Bulgaria, where he hosted “Slavi's Show”, an evening talk show aired every weekday, until he decided to enter politics. In November 2019, he launched own TV channel, 7/8 TV.

The showman first indicated he could set up his own political party in September 2017, when he posted a tweet, apparently addressed to politicians, saying: “The vacation is over. Start worrying”.

Initially, Trifonov tried to register a political party named No Such State. However, a court ruled he could not register it as the Bulgarian flag was used in the logo. Subsequently, Trifonov changed the name to There Are Such People after an album he released in 2017.

In looking for political followers, Trifonov took a very similar approach to when seeking participants for various reality shows in the past – arranging casting calls for politicians.

The latest poll from Alpha Research shows that the ruling Gerb party has managed to regain some advantage ahead of the start of election campaign,  after its popularity slumped during mass protests last summer. Gerb leads the poll, released at the beginning of March, with 28.5% support, and the BSP remains second with 23.2%.

There is Such State is expected to take 13.3% of the vote, putting it ahead of the DPS, the third largest party in the current parliament, on 12.5%.

Centre-right reform-oriented Democratic Bulgaria and Stand Up! Thugs Out!, the coalition between former ombudsman Maya Manolova and the Poisonous Trio, which was the informal organiser of the protests, also have chance to enter the next parliament with support seen at 5.7% and 4.5%, respectively.

52.5% of voters are expected to cast their ballots on April 4, with 15% of them still not certain which party or coalition to back.

Teneo Intelligence’s forecasts are broadly in line with those of the pollster. It expects Gerb to get 26% of the vote, while the BSP will get 22%. There is Such People would come third with 14% support, followed by the DPS with 11%. Democratic Bulgaria coalition is also expected to enter parliament with around 6% of the votes. Stand up! Thugs out! and Gerb’s current junior coalition partner VMRO also have a chance of entering the parliament with around 4% support each.

“The new parliament is expected to be more fragmented, which could complicate the prospects of forming a stable and effective government. Even if the ruling Gerb wins the largest number of seats and gets a first try at forming a new cabinet – as mandated by the constitution – it will likely struggle to find coalition partners. Besides VMRO, none of the top contenders could be expected to enter a formal coalition with the ruling party, which is associated with multiple corruption scandals,” Teneo commented.

Should Gerb fail to form a new government, the second party in parliament would get a mandate. The BSP could strike a coalition agreement with Stand up! Get out! But this would not be enough to form a ruling majority. Trifonov’s party is unlikely to join such a coalition but could be given the mandate to form a government if the BSP also fails.

Trifonov claims he would never cooperate with Gerb, but in the past he has spoken very positively about both Borissov and DPS chairman of honour Ahmed Dogan.

Analysts in Bulgaria therefore are divided in their opinions on what side Trifonov would pick when entering parliament. Despite his comments to the contrary, he is seen as potential new coalition partner for Borissov. However, there were also unproven rumours that controversial businessmen are funding Trifonov in an attempt to replace Borissov, whose charm seems to be exhausted in Bulgaria after dozens of political scandals and three mandates as prime minister.

According to Teneo, Trifonov’s party could try to form a wide technocratic cabinet to lead the country through the pandemic. Such a coalition could include other political newcomers, such as Stand up! Thugs out! or Democratic Bulgaria, also potentially supported by the BSP.

“This appears the most realistic scenario at this point,” it notes.

A coalition between Gerb and the BSP is unlikely, but according to Teneo could be considered given the coronavirus (COVID-19) pandemic.