COMMENT: If Estonia is so great, why is everyone leaving?

Earlier in October, the New York Times published the latest in a long series of optimistic profiles of Estonia. By this point so many similar pieces have been written in outlets like The Economist, The Wall Street Journal, and Bloomberg BusinessWeek that one can identify a recipe. First the journalist takes a breezy trip through Tallinn, noting its “European feel” and its clean streets, cobblestones, and old churches. Next the journalist speaks with an entrepreneur in the technology community, highlighting the country’s business-friendly tax policies and its successful incubation of firms such as Skype. Finally, the journalist will offer an extended meditation on Estonia's sleek, high-tech, and internet-friendly government.

The NYT’s article followed this recipe to a T. In language that sounds almost as if it was lifted from Estonia's economic development agency, the article highlighted a “society that lives first and foremost online” where “everyone files taxes on the web within minutes.”

The NYT piece, and the virtually identical articles that have appeared in the publications highlighted above, all make Estonia sound as if it has discovered some sort of secret recipe. Who wouldn’t want to live in a society in which every government service is provided online? Who wouldn’t want to skip the line at the DMV? What person in their right mind would like to continue using arduous paper forms to pay their income taxes?

The problem is that all of these articles miss the forest for one particularly interesting-looking tree. The simple reality is that Estonia is not, as it might appear, a dynamic and forward-looking place, but one of the most demographically distressed countries on earth. Over the past 20 years Estonia’s population has cumulatively decreased by almost 15%. That’s right: one out of every seven Estonians living in the country in 1992 has either died or emigrated.

As the below graph shows, supposedly hip, modern and internet-saavy Estonia’s population has decreased much more rapidly than “dying” Russia’s over the past 20 years. 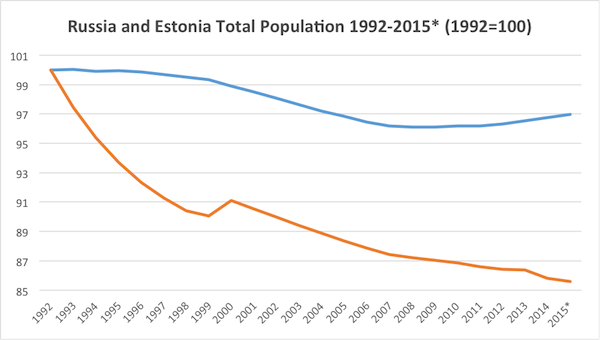 What is particularly noteworthy is that this population decline has actually accelerated since the onset of the global financial crisis. After reading The Economist or the NYT, one would be forgiven for thinking that Estonia has successfully attracted hordes of aspiring entrepreneurs and that Tallinn is some sort of nascent Silicon Valley. Fortunately or unfortunately, reality is precisely the opposite. Unlike “failing” countries like France, Belgium, or even Russia, Estonia is a net emigration society: more people leave the country than arrive from abroad.

Does any of the above negate Estonia’s (real and praiseworthy!) accomplishments in e-government? No. Bureaucracy is time-consuming and expensive, and any reduction in its soul-deadening reach ought to be cheered. It would be wonderful if more governments followed Estonia’s lead in cleaning up and streamlining their operations. But it’s deeply mistaken to see Estonia as some sort of rising economic power because… well because it very simply isn’t.

Any country’s most important resource is its people, and with each passing year there are fewer and fewer people living within Estonia’s borders. That matters, and it unfortunately matters a lot more than free public WiFi or easy-to-use government websites. To put it in the most basic terms possible: whatever the attractions of Estonia’s economic and government model, they haven’t been attractive enough to prevent Estonians from pursuing their futures abroad. Everyone looking at the Baltics should keep that basic data point in mind.