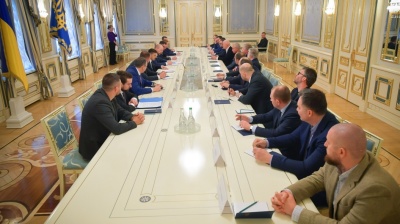 President Zelenskiy held a meeting of Ukraine's top oligarchs and called on them to help fight the coronavirus outbreak in the country
By Ben Aris in Berlin March 17, 2020

Ukrainian President Volodymyr Zelenskiy met with the top 15 Ukrainian oligarchs on the evening of March 16 to call on them to help in the country’s fight against the ballooning coronavirus (COVID-19) epidemic.

No list of attendees was released, but journalists identified many of Ukraine’s top businessmen from the picture.

They include the owner of System Capital Management (SCM) Rinat Akhmetov, Zelenskiy's backer in the presidential elections oligarch Ihor Kolomoisky, and businessman and former head of the central bank Serhiy Tigipko.

The president’s office released a short statement after the meeting.

“Zelenskiy meets with representatives of big business. The event was attended by the owners and top managers of the largest Ukrainian companies and business groups. At the meeting, the Head of State discussed the issue of assistance from big business in carrying out measures to counteract the spread of Ukraine COVID-19,” the statement said. “In particular, it was about assisting with the procurement and supply of large batches of tests, the necessary medical equipment, protective and disinfectants.”

The president stressed the important role that Ukrainian business leaders can and should play in the face of the unprecedented global challenges facing the country.

“Business must be socially responsible in difficult situations for the state. Ukrainians should feel protected when they go to public hospitals. And I insist that you help now. There is no critical situation in Ukraine now, and we hope that we will be able to get out of this period with dignity while preserving the health and life of Ukrainians,” Zelenskiy said.

The businessmen all agreed to help with Ukraine’s response to the outbreak of the virus in the country.

Ukraine reported its first death from the virus on March 13. The deadly infection claimed the life of a 71-year old woman in Zhytomyr Oblast, the chief sanitary officer Viktor Lyashko told the daily briefing of the Ukrainian National Security and Defence Council in Kyiv.

"Unpleasant news. Unfortunately, a woman, who was hospitalised yesterday in the Zhytomyr Oblast, died," he said.

The entire town was placed on lockdown immediately after the report and Ukraine has rapidly been rolling out more preventative conditions, including closing schools, shutting the borders to foreigners arriving in Ukraine as well as cutting train and plane connections with other countries.

The number of reported cases doubled in a week to 45 as of March 14, but the infection is clearly still in its early stages, and the number of infections is expected to continue to rise steeply in the coming weeks. Kyiv reported its first two cases on March 16.

The oligarchs promised to provide all necessary assistance to the state in carrying out preventive measures to counteract the spread of the coronavirus. Ukraine, the participants of the meeting said, is a space of strategic interest for the representatives of big business, who plan to live and work here.