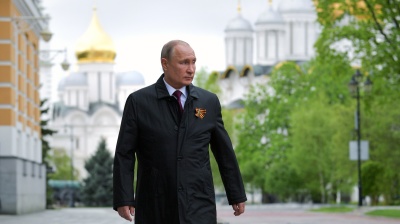 Putin has eased the lockdown restrictions a little, but the change has more to do with restarting Russia's stalled economy than with the population's frustration at being kept indoors. / wiki
By Ben Aris in Berlin May 11, 2020

Russian President Vladimir Putin has lifted many of Russia’s coronavirus (COVID-19) lockdown restrictions, but the number of those infected continues to rise to new daily record highs.

"Starting from tomorrow, May 12, the national period of non-working days will be over for all sectors of the economy," Putin said.

Russia had a total of 221,344 coronavirus cases and 2,009 deaths as of May 11. While many European countries are now seeing their curves flatten and the daily tally of confirmed new cases starting to fall, in Russia the spread of the infection is still accelerating, with 11,656 new cases reported on May 11 – a new daily record.

However, countries around the world are desperate to lift restrictions and put their populations back to work. Russia’s economy has already shrunk by a third since the double whammy of an oil price collapse and the coronavirus related lockdown delivered a body blow to the economy. The previous crisis in 2014 cost Russia around $150mn a week and wiped some half a trillion dollars off the value of the country’s economy.

While Putin outlined some easing of restrictions, the salient part of his televised speech was that the official “non-work” days were over as of midnight May 11, which means companies no longer have to pay salaries to their staff if they don't show up for work, and are free to sack excess labour.

He said the country's "non-working period" imposed to curb the virus had lasted six weeks.

He has also left the details of what restriction to ease or enforce to Russia’s 86 regional bosses. While half of all Russia’s infections are concentrated in the capital Moscow, the virus has spread into the regions and local administrations have been left to deal with it on their own terms. Regions that are badly affected are likely to leave restrictions in place.

Moscow Mayor Sergey Sobyanin extended Moscow’s restrictions to May 31 at the end of last week. Sobyanin said that the number of infections in the capital is likely to be three times higher than the official count of 115,909 as of May 11.

Moscow was forced to cancel the VE-Day celebrations at the weekend to mark the 75th anniversary of the end of WWII, or the Great Patriotic War, as it is known in Russia. Until the coronavirus outbreak the Kremlin was planning a grandiose parade and had invited leaders from all around the world to attend. In the end the Russian armed forces limited themselves to a fly-by over Moscow.

It is unclear what affect the end of the official holiday will have on unemployment and income. Companies have been bleeding cash while they have been forced to effectively stop work, but at the same time pay their staff.

The big companies have large reserves of cash of up to a year, as despite the reforms to the banking sector over the last seven years corporate lending remains a very small part of most companies' capex programmes. However, the small and medium-sized enterprises (SMEs), and especially small companies in retail such as restaurants, are believed to hold no more than one month of cash as working capital. A study by state-owned retail giant Sberbank carried out in April found that payments in general were down by 20%.

Companies will increasingly have to choose between sacking workers or going bust. The big employers have been the focus of the Kremlin’s economic aid programmes, but the SMEs have largely fallen through the cracks. The government released a list of 1,151 companies, both public and privately owned, from across the economic spectrum on April 30 that are entitled to state help, most of whom employ thousands of workers. But the SMEs will struggle tap state funds.

And bankruptcies in Russia are mounting. In the first quarter of 20020 some 22,400 individuals and individual entrepreneurs have been ruled as financially insolvent by Russian courts, making a 70% year-on-year surge, RBC business daily reported on April 7 citing data from the Federal bankruptcy registrar.

As reported by bne IntelliNews, banking and other sectors could be hit by simplified private bankruptcy procedures during the coronavirus epidemic, risking a wave of defaults on loan payments, social security contributions and delays on utility bills, which have already begun to appear.

In 2019 69,000 bankruptcy cases were approved, up by 57% y/y. For now, the spike in first-quarter bankruptcies this year is following the same trend, attributed to the popularisation of the procedure and development of the legal framework.

In March alone, 67,000 sole proprietors closed their businesses, a 77% increase compared to the decline experienced in March 2019. Similarly, a survey conducted by InFOM reveals that 16% of the population has already experienced a significant decline in income. An additional 19% of respondents reported that their incomes had fallen slightly, while a third (33%) expect the situation to worsen in the next month.

However, the suddenness of the outbreak and speed it tends to burn out – China’s epidemic lasted 10 weeks from start to almost end – could limit the number of bankruptcies. However, each week the lockdown is extended will result in a geometrical increase in the number of bankruptcies – something that could rapidly lead to protests and which the Kremlin is keen to head off as quickly as possible.

While unemployment has been at post-Soviet all-time lows in recent years, despite the 2014 crisis and subsequent recession, that could change now.

Russia’s unemployment may jump to 7-8%, or even to 10% in the worst scenario amid the coronavirus outbreak, the Audit Chamber’s head Alexei Kudrin told Rossiya 1 television channel on April 25.

“So far, oddly enough, even despite the transition to a very serious stage of the crisis, we have a minimum number of registered unemployed. We have 0.7% unemployed of the economically active population. This is registered. If we take it by other standards, by the standards of the International Labour Organization, we have 4.5% of the unemployed,” Kudrin said. According to the Federal State Statistics Service, Russia’s unemployment stood at 4.7% in March.

The population has been narked by the stagnant real income growth of the last six years, but the majority of Russians have had a job and can cover the basics even if buying those little luxuries has become more painful. But a return to double-digit rates of unemployment would be a return to the pain of the economic miasma of the Yeltsin years and would have unpredictable political consequences for President Putin. Putin’s approval rating has already fallen to its lowest level since he came to power more than 20 years ago, a Levada opinion poll found on May 6.

The easing of Russia’s lockdown is an attempt to restart the stalled economy and Putin also called on regional governors to come up with plans to get the country back to work by June 1 that will revive production, create jobs and stimulate credit, according to orders published on the Kremlin’s website.