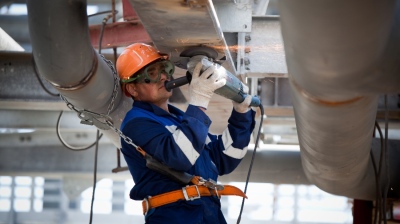 The exodus of foreign companies from Russia has already put over 100,000 Russians on the dole, but the deep economic contraction on its way could see unemployment skyrocket. / wiki
By FPRI BMB Russia March 21, 2022

The real scale of Russia’s economic crisis is only going to become evident in the next few months when unemployment begins to rise. This is likely to come in several waves.

The first is happening now and will affect people working in foreign companies that are withdrawing or suspending operations in Russia. According to a running list maintained by Yale School of Management (partly it seems with the aim of putting pressure on hold-outs), 150 companies have completely withdrawn from Russia and a further 180 have suspended operations.

According to RosStat (with thanks to Ilya Matveev for the link) 2.8mn people, 6.5% of the formal workforce, are employed in foreign companies or foreign-Russian joint enterprises. But not all of these are western companies and not all will withdraw. For international firms in the retail and service sectors, the decision is probably fairly easy to make. The transactional and logistical costs of staying in Russia are huge and the losses in terms of fixed assets are relatively limited. That’s not the case with major investors in the manufacturing sector like Renault, whose joint venture with Avtovaz employs 40,000 people and accounts for 10% of the firm’s revenues.

The decoupling of Russia’s economy from the West will also, at least in the short and medium term, eliminate certain types of economic activity. 6.2mn people (14% of the formal workforce) work in the transportation and storage sectors, a significant share of which involves the import and re-sale of foreign goods. 1.5mn people work in the financial and insurance sector.

The second aspect of the employment crisis is caused by the disruption to supply chains, which has forced major manufacturers to pause production and furlough their staff. Avtovaz has sent all its employees on 20-day leave because of a shortage of electronic components. A recent study identified the most vulnerable economic sectors as being the pharmaceutical and chemical industries (almost half of their products have been hit by sanctions), aircraft and ship manufacturing (one third), car manufacturing and plastics (just over a quarter) and electronics (one fifth). Estimating how much production will be lost, rather than paused, is difficult because a significant amount of the supply-chain disruption has been caused by sanctions over-compliance, which could subside over time.

The third stage of the crisis will be the impact of the sharp fall in household spending power, the tightening of credit conditions, and the collapse in consumer confidence. This will be a much wider crisis, affecting sectors less dependent on international trade, such as construction and the service sector.

Overall, the Centre for Macroeconomic Analysis and Short-Term Forecasting projects unemployment could rise to 7-8%, from under 5% in 2021 (an increase of 2.2mn). That will be a major political and economic crisis, but it is worth noting that such an outcome would be much less severe than in 1998, when unemployment exceeded 13%.

ASH: The West is short-changing Ukraine
1 day ago
RIDDLE: If they fear us they respect us
1 day ago
COMMENT: Can Russia pivot its European gas sales to Asia?
4 days ago
Perspectives | Beijing and Moscow clash over Kazakhstan’s oil
4 days ago
COMMENT: Emerging European tightening cycle coming to an end
8 days ago