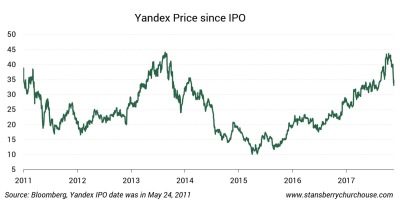 Yandex is one of the few Russian stocks that has regained its pre-crisis IPO valuation
By Vadim Dumesh in Paris October 19, 2018

Russia's largest state-controlled bank Sberbank has been in talks to buy a blocking stake in Russia’s most valuable digital company Yandex. The state-owned banking giant has been holding negotiations with the founder and main shareholder of the company Arcady Volozhin on buying at least a 30% stake, Vedomosti daily and The Bell reported on October 18 citing unnamed sources in the bank.

Sberbank is on the forefront of digital development in Russia and already works closely with Yandex on such projects as Yandex.Money, Yandex.Checkout and "Russian Amazon" Yandex.Market online marketplace. But the prospects of state control over the company scared investors. Shares of Yandex sank by over 7% on Moscow Exchange and NASDAQ following the news, and declined further by 10% on the October 19 trade opening in Moscow.

The CEO of Sberbank German Gref and his deputy Lev Khasis denied holding any negotiations with Volozh, who controls 10.35% of the company's capital and 49.2% of the voting rights. Other large shareholders include company's veteran Vladimir Ivanov (3.83% of capital and 6.23% of votes) and the US WMC (5.12% and 2.46%).

When Yandex listed on NASDAQ back in 2009, Sberbank acquired one of the priority, or so-called "golden shares," in Yandex, which gives it right to veto any sale of more than 25% in Yandex. The deal was seen as guarantee that foreign investors could not control the company, Vedomosti reminds.

"The Sberbank / Yandex relationship history is long and to us this looks like a ‘creeping’ takeover," VTB Capital commented on October 19. "With the business model of both companies evolving to ecosystems, deeper integration between the two is a logical step," VTB believes, especially in light of the recent Mail.Ru/AliBaba joint venture.

Lately Kremlin bureaucrats and security forces hawks have been calling for tighter state control over Yandex, annoyed by the fact that RuNet's largest search engine independently operates powerful media and information resources such as Yandex.Novosti and Yandex.Zen. Yandex was recently put under pressure by state-affiliated Gazprom-Media over piracy allegations.

In this situation Sberbank sees itself as a "white night" that could save Yandex from direct state control while at the same time reassuring the Kremlin and bringing additional investment, unnamed sources in the bank told Vedomosti. Sources in Yandex claim that any state leverage over the company will negatively influence the Yandex team, many of which would simply leave. Yandex is considered to be one of the best companies in the country and run as a modern, independent and highly effective business.

VTB estimates that should Sberbank pays a 50% premium to buy out Volozh’s type B shares, it could cost $1.6bn, which is immaterial on Sberbank's expected to cash in $3.4bn on the sale of Turkish DenizBank alone. Buying an additional share issue of Yandex would cost more than $4bn, on VTB's numbers, posing  downside risks to Sberbank's dividends.

However, VTB analysts admit that the tie-up does not look that attractive from the investor standpoint, not only because of the risk of employee outflow from Yandex. Current joint ventures in e-commerce and payments already capture most of the upside for Sberbank, VTB Notes. Capital allocation would also be as Yandex is trading at consensus 2019 forecasted Price/Earnings ration of 25.8x versus Sberbank’s 4.6x.

RBC business daily reminds that among Yandex minority shareholders are many foreign funds, such as Wellington Management Group, FMR, Capital Research Global Investors, OppenheimerFunds, Morgan Stanley, Blackrock, and French Carmignac Gestion, all of which are also likely to receive any attempts for the state to control the company negatively.

Notably, Sberbank and other state-controlled banks have recently been under pressure from renewed sanction build up, and could spill over sanction risks on Yandex.