Cars account for 60% of Slovakia's exports to the US.
By Clare Nuttall in Bucharest July 4, 2018

Higher US import duties on cars would hurt Central European economies where car and auto-parts manufacturing accounts for a large share of exports, warns the Vienna Institute for International Economics (wiiw).

There are growing signs that having embarked on a trade war with China, the EU is the next of the US’s major trading partners in the sights of the country’s volatile President Donald Trump.

Trump has repeatedly criticised the EU, which had a $101bn trade surplus with the US in 2017, of unfair competition, claiming his country is being “ripped off” by European economies.

Having imposed punitive duties on some Chinese products — after which Beijing’s additional duties on $34bn worth of US imports are due to kick in on July 5 — Trump has been talking in the last few months about similar measures towards EU exporters, in particular for cars.

“The EU is possibly as bad as China, just smaller. It’s terrible what they do to us,” Trump told Fox News last month, going on to again air his often voiced grievance about the failure of European Nato members to meet the 2% of GDP defence spending target for alliance members.

In a webinar on June 28, wiiw analysts said the risk of a trade war was one of the main downside risks facing Central, Eastern and Southeast Europe.

“The risk of a trade war, especially the intention of President Trump to impose higher import tariffs on European cars will affect many countries in the region, especially in CEE where the car industry is extremely important,” wiiw economist Vasily Astrov said.

wiiw calculated the potential impact of a 25% tariff on EU car imports in May, though the figure currently being bandied about is a somewhat lower 20%. 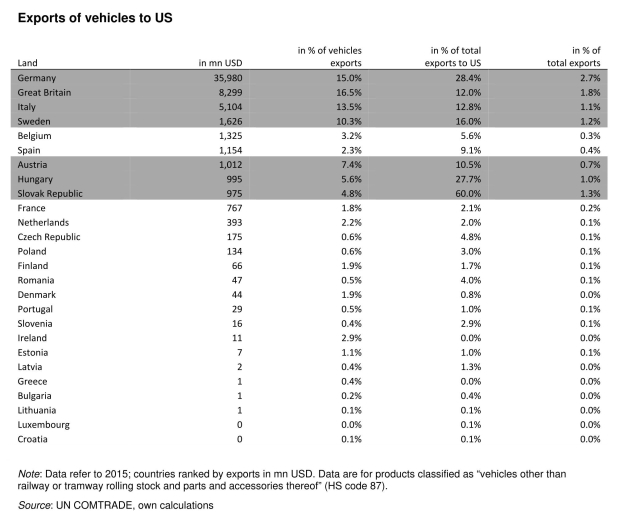 The car industry is responsible for more than half of Slovakia's exports, and swelled by 10.7% in April, according to the latest statistics office data, which was more than double the 4.2% growth of the wider industrial sector. Lubomir Korsnak, chief economist of UniCredit Bank Czech Republic and Slovakia, stressed at the time that the car industry “should be the main driver of the industry”, and pointed out that it would get a further boost with the launch of Jaguar Land-Rover’s new plant.

Also Slovakia, Germany, where cars account for 28.4% of exports to the US, would bear a substantial direct impact of a tariff hike; Germany’s exports of cars to the US are the largest in the bloc and account for 2.7% of its total exports. Germany is followed by Hungary, where cars make up 27.7% of its exports to the US. Automakers active in Hungary include Mercedes, which reached a record of 190,000 vehicles produced at its Kecskemet factory last year.

Other CEE/SEE countries would experience a smaller impact. Cars account for just 4.8% of the Czech Republic’s exports to the US, while the figure is 4.0% in Romania, 3.0% in Poland and 2.9% in Slovenia.

In addition to the direct consequences of dramatically higher export tariffs, there is also the indirect impact on components manufacturing.

“I am not only taking about direct sales of cars to the US,” said Astrov during the webinar. “There is also the indirect impact as many countries are integrated in international supply chains, they supply components for cars produced in Germany, for example, that are then exported to the US.”

“Automotive production is one of the industries with the largest cross-border production integration and therefore not only the car exporters themselves but also the upstream industries and countries are affected,” says wiiw’s report ‘US tariffs on cars: An expensive and dangerous gamble’.

“For [a] group of countries which are strongly integrated in the German value chains – Hungary, Slovak Republic, Czech Republic, Poland, Austria – one finds that the indirect value added due to production networks are particularly strong. Consequently, the announced tariffs on US imports on cars of 25% would impact negatively on exports and therefore on income in all parts of the world, but particularly on countries specialised in the transport industry either by being exporters or integrated in the global production networks.”

Other countries to be affected include Romania, where the likes of German premium car parts manufacturer Dräxlmaier have operations, and Slovenia. 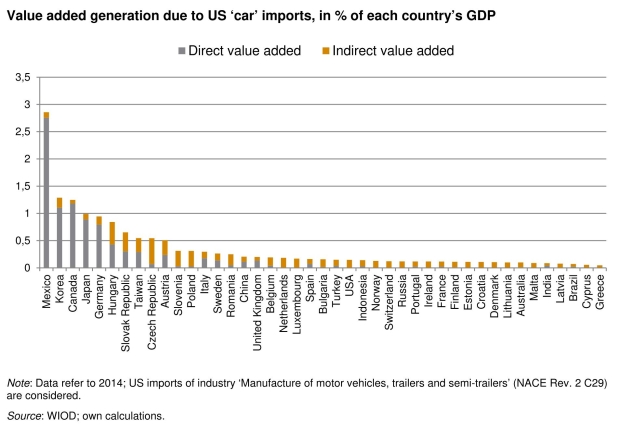 The opening of a trade war with a hike in car import tariffs would also destroy jobs in exporting countries. 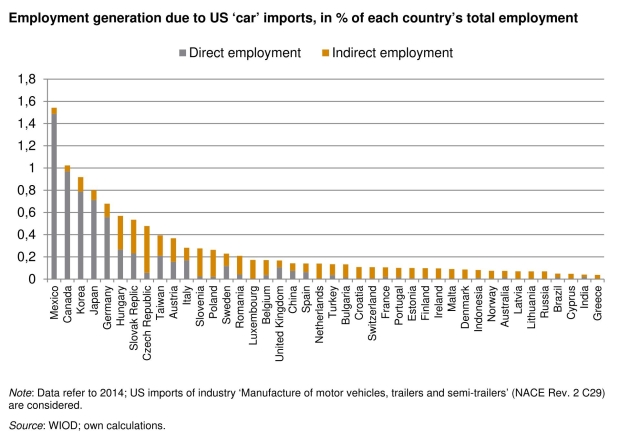 Saakashvili’s return: more shrewd than it seemed?
1 hour ago
Czech PM to allow opposition coalitions to form new government
9 hours ago
Hungarian opposition voters pick Marki-Zay to challenge Orban in 2022 elections
9 hours ago
Efforts to deploy US counterterrorism forces in Uzbekistan may not be over
2 days ago
Turkmen petrochemical plants ‘channelling exports via obscure UK firms tied to president’s nephews’
3 days ago