Commercial real estate investment in Russia increased by 34% y/y to RUB243bn ($3.8bn) in 2019, real estate group CBRE said in a report released in the middle of February. The annual increase in transaction volume was only the fourth in the past 10 years, following gains in 2013, 2016 and 2017, CBRE said.

“Purchasing activity was supported by the steady macroeconomic environment, with key indicators either improving or meeting expectations. The Central Bank of Russia’s (CBR) lowering of key interest rates to the lowest level since early 2014 improved conditions for debt financing, which also fuelled investment demand,” CBRE reports.

Real estate is usually first into a crisis and last out. The collapse of oil prices and the subsequent deep devaluation of the ruble wounded the sector, which has been struggling ever since. However, after the economy started growing again in 2016 and more recently real incomes started to recover in 2019 the conditions for real estate developments have considerably improved.

Given the average transaction size is still half that of four years ago, clearly the sector is only just stepping off square one and this is not the start of a boom, but given real estate is a multi-year proposition some entrepreneurs think the time is right to get back into the market. As bne IntelliNews has reported, three Moscow real estate legends – Michael Langer, Jean Francois Ott and Michel Pascalis – began fundraising for a $140mn fund that will specialise in developing smart warehousing to cater to the burgeoning e-commerce sector in January. 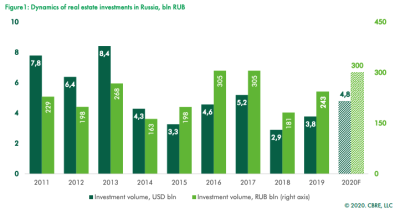 The retail sector accounted for around a third (30%) of all the transaction volume in 2019, ensuring it retained its title as the most popular sector for the third consecutive year.

Several landmark shopping centre deals were closed during the period, pushing up transaction volume in the sector to RUB71bn, compared to RUB55bn a year earlier.

Offices were the second most active sector, accounting for 25% of investments. Transaction volume in this sector rose to RUB60bn in 2019 from RUB50bn in 2018.

The introduction of the escrow accounts last year – developers can no longer take payment in advance for uncompleted homes – dramatically affected the residential development business, with large developers seeking to add to their land banks by purchasing projects from non-core players before the laws came into effect in July.

And investment in the industrial and hotel sectors accounted for 13% and 7%, respectively, of transaction volume in 2019. 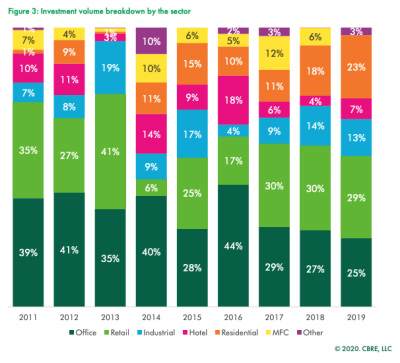 And the action was not just limited to Moscow as St Petersburg accounted for a record more than a third (37%) of all investments, up 13pp year-on-year. Investors purchased around RUB90bn worth of real estate in the northern capital over the course of the year – more than double the figure in 2018.

“However, this figure was skewed by the completion of one major deal and is not indicative of a lasting trend,” CBRE reports.

Transaction volume in Moscow increased by 18% y/y to RUB140bn in 2019, representing 56% of nationwide investment. Investment in regional markets remained limited, accounting for just 7% of transaction volume.

While the foreign investors that drove the noughties real estate boom are drifting back, another sign that it is still early days for the sector’s recovery is the fact that the investment into real estate remains largely a domestic affair.

Russian investors accounted for 71% of investment volume in 2019. Buyers from abroad bought a few buildings, but the ones they did buy were very large. 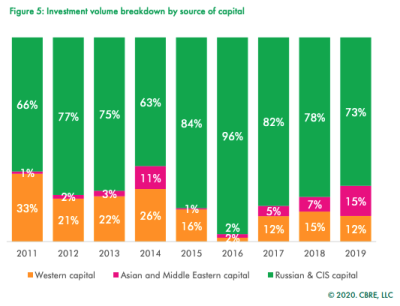 Residential to get a boost from national projects

The sector is expecting an extra fillip in 2020 thanks to the increased spending by the government on the 12 national projects, which includes heavy investment in expanding the stock of residential accommodation.

Russia’s Ministry of Construction said overall housing completions will be flat y/y in 2019 at 80mn sqm in 2020, according to Vedomosti. On a separate note, the federal housing agency DOM.RF estimates that 27% of housing was sold in line with the new escrow regulations in the Moscow Metropolitan Area as of January.

While investment into the residential sector accelerated in 2019 the growth in completions is still lagging but they have also turned the corner: residential completions were up 6% y/y to 80mn sqm after three years of declines, according to the DOM.RF.

The volumes reflected a pick-up in sales after the crisis in 2016 and the consumption backdrop stabilised along with the value of the ruble. Last year, individual construction was up 13.5% year-on-year and outperformed industrial production, which was up by 0.6% year-on-year. The construction volumes were 36.8mn and 43.5mn, respectively.

Under the new escrow rules, access to capital is vitally import for residential developers and is expected to drive a consolidation of the sector as the smaller players will struggle to raise money for their projects. Already last year the largest increase in bankrupt developers in 2019 (85%) came from small companies with only 5,000 to 10,000 sqm.

Another big change underway in the real estate sector is the number of “mega” malls is falling as developers are increasingly concentrating on building smaller complexes, but placing them closer to shoppers.

Russia’s retail sector is in the throes of some dramatic developments as increasingly traditional bricks and mortar shops have to complete with the rapidly expanding e-commerce business. For example, Russian internet giant Yandex launched a 15-minute grocery delivery service in January that is specifically designed to take on supermarkets.

The rapid changes have made investment in commercial real estate more risky but Cushman & Wakefield still expects investment into the sector to grow by 9.5% this year.

Six retail projects have already been postponed this year with a total area of 183,000 sqm, according to Cushman & Wakefield, and half of the new space coming online is small and medium-sized stores with a total space of 30,000 sqm. In general shopping centres are getting smaller and are being built closer to residents or to metro stations.

“There were hopes that 2019 would be a breakthrough and end with the commissioning of half a million meters, but the abnormally warm winter dropped the turnover of retailers, they got together, began to optimise the rented areas, which forced developers to reconsider their plans,” Evgenia Hakberdieva, director of retail real estate department at Knight Frank told Vedomosti.

Warehousing in a class of its own

However, warehousing development remains in a class of its own. While commercial real estate projects are increasingly finding themselves in direct competition with e-commerce businesses, warehouse developer are benefiting from the booming online retail business. All those online stores need to keep their physical products somewhere and they need sophisticated warehouses to get their products to the customer quickly.

The total supply of class A warehousing space in Moscow has been creeping up by about 100,000 sqm each year over the last three years and will reach a total of 13.7mn sqm by the end of this year, estimates CBRE.

CBRE expects new warehouse supply to amount to 900,000 sqm in 2020. Almost 800,000 sqm of new supply was already under construction as of the end of the fourth quarter of 2019 with about half this amount available for pre-leasing.

“Built-to-suit projects will continue to comprise a considerable portion of new supply, although their share will be less than in 2019. CBRE expects the ratio of contracted and vacant space among new facilities in 2020 to be approximately 65%/35% compared to 77%/23% in 2019,” CBRE said in a report.

And construction will continue, as the new supply coming onto the market is still less than the demand: 1.2mn sqm of warehouse space was leased or purchased in the Moscow region in 2019. “While this marked a decline of 20% y/y, it was nevertheless the second highest annual total on record,” CBRE said.