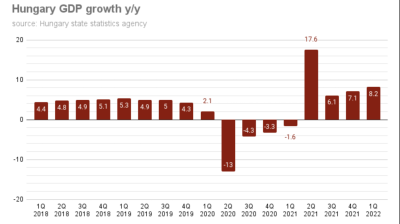 Hungary's economy expanded by 8.2% year-on-year in Q1 and by 2.1% q/q, the Central Statistics Office (KSH) confirmed in a second reading on June 1. Both data exceed analysts’ expectations.

Growth was broad-based as almost all sectors contributed to growth, but industry and market services were the main drivers spurred by pre-election handouts and transfers. The outlook for the remaining part of the year is grimmer, due to the impacts of the war, the cutback in public investments and government transfers running out, according to analysts.

Broken down by sectors, on the production side, services added 5.3pp to growth, while the construction sector added 0.6pp and industry 1.2pp.

The output of industry rose 4.9% during the period, while the output of services climbed 9.9% and construction output increased 18.3%. Within services, the output of the commercial accommodations and catering segment rose 80.8%, rebounding from the base period when pandemic restrictions still weighed.

Fiscal adjustments could cause growth to slow in the third quarter as state investments are rescheduled, while higher financing costs could hold back private sector investment, he added.

CIB Bank expects growth at 4-5%, but its outlook is characterised by greater than usual uncertainty against the backdrop of the war in Ukraine and state-of-emergency measures, chief analyst Mariann Trippon said at a press conference on June 1.