Russia’s GDP declined by 4.4% year on year in October 2022, according to the data from the Ministry of Economic Development, following a 5% contraction seen in September.

As followed by bne IntelliNews, the third quarter of 2022 started out with Russia seemingly adjusting to the fallout from the military invasion of Ukraine. In September the metrics deteriorated across the board after a sharp escalation of the war, a round of mobilisation and domestic demand failing to keep momentum in the sanction-isolated economy.

Still, the GDP decline in 3Q22 overall was contained at lower-than-expected 4% y/y.

But October’s data show that Russia's economic performance did not improve much in the reporting month, and remain vulnerable to a wide range of external and internal shocks, BCS Global Markets commented.

BCS GM analysts note that “recent geopolitical shock placed extra pressure on the market and consumption,” adding that the outlook for the coming months – given [the] oil embargo – remains “murky”.

However, while internal shocks led to a substantial contraction in consumption – which since April, has remained 10% lower than in the last year – external shocks are primarily translated through mining and manufacturing, which are also under pressure, down 2.7% y/y and 2.4% y/y respectively in October.

At the same time, BCS GM analysts highlight that October continued to surprise the market by strong figures in construction, which achieved 9.6% y/y growth, seen last in mid-2021. Agriculture also supported the Russian economy, albeit its growth decelerated from 6.7% y/y in September to 4.6% y/y in October.

A separate release from RosStat showed that overall base sector output fell 3.2% y/y in October, an improvement on the 3.5% drop in September. Base sector output was down 1.1% y/y in 10M22 overall.

Sberbank CIB estimated that base sector output rose 0.6% m/m in October adjusted for seasonality, driven by construction (up 1.7% m/m), transport (0.3%) and industrial production (0.7%). The domestic demand continued to show weakness with the retail and wholesale trade sectors shrinking 9.7% and 22% y/y in October respectively.

"Meanwhile, the drop in real wages eased to 1.4% y/y in September [latest available data] from 1.2% in August thanks to slower inflation," Sberbank CIB wrote. To remind, previously the disposable income in Russia remained resilient on state support.

"Rosstat data for October mirrored September's trends, with demand-side indicators marginally better than we expected, while construction continued to offer the biggest surprises. The situation in industry was supported by government orders and activity in the export-oriented extractive industries remained fairly stable in the run-up to the oil embargo," Renaissance Capital wrote.

"For the time being, we can say that the mobilisation effect has subsided and that the smooth recovery trend from the middle of the year has returned. However, economic uncertainty remains elevated," RenCap analysts commented.

BCS GM believes that December might be the toughest sanction month yet, given the looming oil embargo. “If the sanction effect turns out to be mild, we may expect that Russia’s GDP will be only 3-3.2% lower than in 2021; however, the key risks seem to shift to the next year,” BCS GM analysts believe.

Sberbank CIB did not comment on the short-term sanction outlook and given slightly better-than-expected base sector data in October expects a decline in GDP this year at 2.8%. 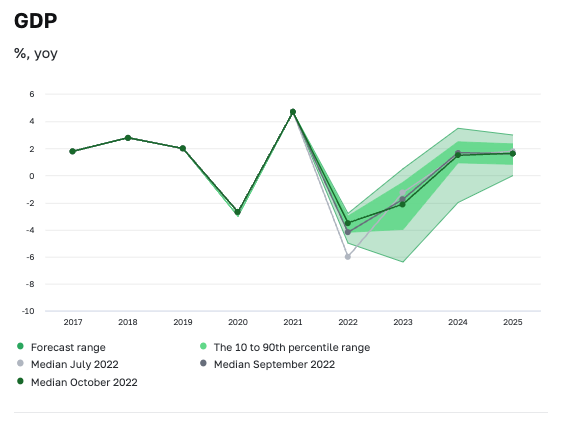