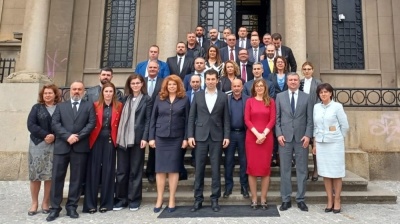 Bulgarian PM Kiril Petkov and other Bulgarian officials on a visit to Bitola, North Macedonia. / government.bg
By Valentina Dimitrievska in Skopje April 19, 2022

The leader of North Macedonia’s opposition VMRO-DPMNE, Hristijan Mickoski, and the Jewish community in the country urged the EU on April 18 to put an end to Bulgarian provocations and "hegemonic intentions" after the opening of a Bulgarian cultural centre in North Macedonia named after the controversial Nazi collaborator, Ivan (Vancho) Mihajlov.

The opening of the controversially named cultural centre took place amid efforts by the governments in Skopje and Sofia to improve their relations after Bulgaria vetoed the launch of EU accession talks with North Macedonia due to language and history issues.

Bulgarian PM Kiril Petkov was among the Bulgarian officials who attended the opening of the centre on April 16, as part of a visit during which he also talked of the need to resolve issues with North Macedonia.

However, the opening of the Vancho Mihajlov cultural centre sparked criticism from top officials in North Macedonia, and an even stronger outcry from the opposition and the Jewish community.

In the early 20th century, Mihajlov cooperated actively with Mussolini and Hitler's Nazi Germany. He also fought for unification of Macedonian territories and their merger with Bulgarian state. The event was therefore seen by the public in North Macedonia as a disrespectful and humiliating move and a clear provocation — despite a claim by Petkov that the centre would provide “another opportunity for good neighbourliness”.

In a reaction, North Macedonia’s President Stevo Pendarovski said on April 17 that although the opening of cultural centres throughout the democratic world is a step towards bringing peoples closer, the naming of cultural institutions after a proven collaborator of the fascist regime does not serve that noble cause.

“Unfortunately, an attempt was made in Bitola, a proven collaborator of the Hitler Nazi regime to be presented as a bridge of rapprochement between the two countries. I am sure that neither the Macedonian nor the Bulgarian people believe that the character and work of Vancho Mihajlov can contribute in that direction,” Pendarovski said.

PM Dimitar Kovacevski said on April 17 that Mihajlov was a controversial historical person, but since the opening of the centre was a civil initiative, such projects are not subject to state supervision because of the European Convention on Human Rights, with which North Macedonia is fully compliant.

“At the same time, the government and the public are looking forward to the day when the time will come when those citizens who have Macedonian self-awareness in Bulgaria will be able to practice their beliefs in the same free way,” Kovacevski said.

Meanwhile, according to a VMRO-DPMNE party statement, Mickoski said: “I call on the EU to put an end to these fascist and hegemonic intentions of our eastern neighbour and to enable [North] Macedonia to finally start negotiations.”

Named for a ‘proven fascist’

The Jewish Community recalled that 7,144 Macedonian Jews or 98% of the Jewish population in Macedonia were sent to the Treblinka camp.

“This act is an insult to the Jews and a threat to human rights and freedoms, a violation of the democratic values of modern Europe. This is a classic example of disrespect and distortion of history,” the Community said.

Among other things, the Jewish Community urged the EU and the European Parliament to condemn this behavior of Bulgaria.

It also asked North Macedonia’s parliament to adopt the amendments to the criminal law, initiated by the Jewish community in 2017, under which the spread of anti-Semitism, denial and distortion of the Holocaust, glorification of fascism and Nazism, as well as the use of their symbols and greetings would be punished by law.

The Jewish Community demanded that the Bulgarian government apologise for the atrocities and the Holocaust committed by their predecessors during World War II. It also insisted on initiating a procedure in North Macedonia regarding the legal viability of cultural and other centres as well as civic associations bearing the names of proven fascists and Nazi collaborators.