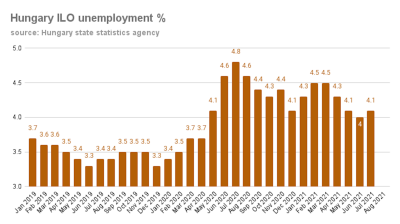 Hungary’s unemployment rate slipped to 3.9% in July from 4% in the previous month and fell 0.6pp y/y, according to figures from the Central Statistics Office (KSH) on August 26. The number of unemployed fell to 189,000, down 4,500 from the previous month, and 28,500 fewer than a year earlier.

In comparison, unemployment in the eurozone is almost twice as high, but analysts note that Hungary’s statistics are distorted by the high number of workers on public works schemes and the fact the companies employing less than five are not included in the statistics.

The average duration of job search was 8.7 months and one third of the unemployed had been looking for a job for at least a year, according to the KSH.

Hungary’s labour market has been resilient and recovered quickly from the pandemic, helped by coordinated economic protection measures by the state and the central bank. This can be seen from the fact that the number of people in employment reached almost 4.7mn in June, 27,700 more than in the previous three-month period and up 61,500 from a year earlier.

The record employment level was spurred by the lifting of third-wave restrictions and the recovery of the services sector, mainly domestic tourism and hospitality, as well as seasonal factors, analysts noted.

Some sectors may face labour supply constraints with the shortage of staff, which could drive up wages, they added. The MNB forecasts that wages could rise by an average of 7.5% in the following year.

If no further restrictions to combat the coronavirus pandemic are imposed, then employment could rise and the unemployment rate could remain below 4% in 2021.

According to the MNB's current forecasts, the unemployment rate will fall to 3.5% in 2022, but labour shortages could return in some sectors, pushing up ages and creating more inflationary pressure, it added.

Russia’s industrial output decline slows to only 0.1% in August
7 hours ago
Putin's popularity remains high, but even after a hit in September it is still at 77%
7 hours ago
Russia on track to have a record-smashing grain harvest
2 days ago
Bosnia posts annual CPI inflation of 16.8% y/y in August
2 days ago
IMF sees Romania’s economy growing by 4.8% in 2022, analysts are even more bullish
3 days ago