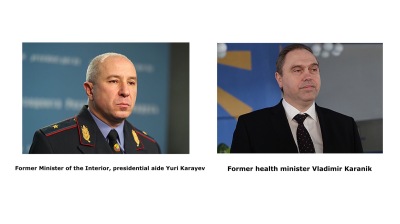 Belarusian President Alexander Lukashenko has named former minister of the interior and presidential aide Yuri Karayev and former health minister Vladimir Karanik as possible successors if he were to stand down as president, Tass reported on March 19.

He underscored that the transition of power can happen only via elections, reiterating that his children will not become presidents after him.

"There will be other presidents. I can guarantee this. Then you will be able to compare and understand everything. For now just stay patient," Lukashenko said at a meeting with the staff of a dairy company in Grodno.

"I have two people standing here, they might participate in the presidential elections, they will be strong candidates. One is a general [Yuri Karayev], and the other one is a governor [Vladimir Karanik]. They’re young, they are smart and they know what this country is worth," Lukashenko added, pointing to the members of his inspection delegation.

Police Lieutenant General Yuri Karayev from November 2012 to June 2019 was the Deputy Minister of the Ministry of Internal Affairs of Belarus and the commander of the internal troops, and then the head of the Ministry of Internal Affairs. On the eve of his resignation on October 29, 2020, commenting on the protests in the country since August, the official declared a war in the republic and allowed the use of military weapons against protesters who behave aggressively, including attacking law enforcement officers.

Vladimir Karanik, prior to his current post, which he took at the end of August 2020, has been the Minister of Health of Belarus since June 2019. In August he left to shouts of "Shame!" from a rally of doctors demanding that he let them go to the detainees during the demonstrations and assess the condition of the people. After that, the official wrote an open letter to the protesters, where he stated that there was no dialogue with the protesters and he "got the impression that the audience did not need him."

The head of state continued that "there are worthy people, who know the country" in Belarus, and they will compete.

Belarus has been wracked by mass demonstrations since the disputed August 9 elections. The opposition, led by the Coordinating Council, has three demands: Lukashenko steps down as president; new presidential elections are held; and all political prisoners are released.

Lukashenko has proposed changing the constitution, which will almost certainly be followed by parliamentary elections and then presidential elections. While Lukashenko has not laid out a time table for these changes – and he recently failed to offer a draft version of changes to the constitution as promised at the All People’s congress last month – he has suggested the new constitution will not be ready until next year.

The Kremlin has also been pushing for changes to the constitution as the easiest way to defuse the political crisis, but also wants to go slow, as it has been reported that it is preparing a pro-Russia political party to stand in the mooted parliamentary elections.

The opposition is unlikely to accept any candidates for president put forward by Lukashenko. Opposition leader Svetlana Tikhanovskaya won the August 9 election according to independent polls released at the time and jailed opposition leader Viktor Babariko was widely expected to win a free and open vote for the presidency.

Lukashenko warned that the "world has gone crazy" and asked his fellow citizens to be closer to each other.

"We must pull through. The world has gone crazy. People in this world have lost their sense of direction. This is not the right moment to go to extremes. For this reason, I proclaimed this year as the year of popular unity," he said.

Lukashenko is certain that Belarus will remain united.

"We will not bow to anybody. We will not kneel in front of anybody. There are people who do not like many things. We’ve got to be patient. An overwhelming majority wishes to live in peace and calm. Sociological polls indicate that the people are afraid of losing stability and order in the country. This is very precious. The people have realised what they could and can lose. We must prevent this from happening," Lukashenko said.

"I had a gut feeling. I didn’t have the facts that I have now, but I felt that we were beginning to be torn apart. I’ve frequently said that Belarus is at the breaking point. Russia cannot afford to lose us, because the last stronghold is here," he stressed.