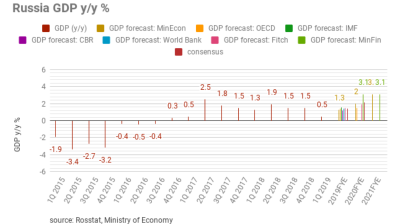 The 0.5% growth is well below the 0.8% expected by the Ministry of Economic Development and 1%-1.5% by the Central Bank of Russia (CBR) in the reporting quarter, and is the slowest quarterly growth since 4Q17.

Slow GDP growth reinforces the first-quarter base sector statistics, which showed rather moderate results and had analysts hoping for a fiscal spending stimulus later in 2019 supporting the output.

Analysts surveyed by Vedomosti daily note that economic growth in the reporting quarter has alarmingly underperformed even the most pessimistic forecasts, while pointing that for an emerging economy 0.5% growth is close to recession.

The economics ministry attributed the slowdown to weak domestic demand with consumer demand compromised by shrinking real income (down by 2.4% in 1Q19) and the VAT hike. Overall in 2019 the ministry forecasts 1.3% GDP growth versus 2.3% seen in 2018, the CBR forecasts 1.2%-1.7% growth, which is conditioned by the launch of 13 national investment project and the inflow of public spending.

As analysed by bne IntelliNews last month, the Kremlin is launching into a six-year long RUB27 trillion ($400bn) spending bonanza that is intended to transform the economy by spending a third of the money on infrastructure, and if the money is well spent it could lead to a boom.

Sberbank CIB argued on May 20 that "based on monthly sector data, the deceleration in economic growth was broad-based, but the main drags were construction (due to the high base of the previous year) and trade (due to a slowdown in the retail sector and a drop in wholesale trade)."

Tikhomirov warns that as state investment has de-facto remained the main driver of economic growth and slow start to many of the national development programs means that their effect on Russia’s macro performance could "well be delayed until 2020 or even later." BCS thus sees donwside risks to the 1.5% of GDP growth forecast for 2019, even with good harvest expected to support growth.

Sberbank mantained its GDP growth outlook unchanged at 1.5% for 2019, given that "the first quarter usually makes the smallest contribution to annual GDP" and still expecting improvement from higher government spending on infrastructure projects and lower inflation.

In the meantime, underperforming economic growth in the first quarter increases the likelihood and the possible scope of the monetary easing expected to be launched by the CBR already starting with the second quarter of 2019.