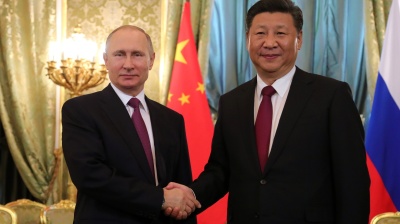 Vladimir Putin and Xi Jinping in the Moscow Kremlin on July 4.
By bne IntelliNews July 5, 2017

The Russian Direct Investment Fund (RFPI) and China Development Bank (CDB) agreed to establish a Russian-Chinese development fund worth $10bn at the third meeting this year between Russian President Vladimir Putin and his Chinese counterpart Xi Jinping in Moscow on July 4.

The CNY-denominated fund is expected to boost direct investment in national currencies under conditions of extended US and EU sanctions against Russia. In addition to the RFPI-CDB deal, Russia’s state development bank Vneshekonombank (VEB) received a 15-year $1bn loan from CDB to set up a new innovation-focused fund.

VEB, which had to go through a major restructuring after Western funding was excluded under the sanctions, said the fund would invest in energy, industry and transport in Russia, as well as cross-border projects in Siberia and Russia’s Far East.

Around two dozen documents in a range of areas were signed during Xi's sixth visit to Russia since 2013. At their meeting, Putin awarded the Chinese leader the order of Andrew the Apostle, Russia's highest honour, “in recognition of his personal contribution to the consolidation of friendship between the peoples of Russia and China”.

“I can say that this visit was very fruitful and has given a fresh impetus to the development of comprehensive Chinese-Russian partnership and strategic cooperation,” Xi said at a news conference after the talks in the Kremlin.

The countries will continue to regard their relations as “a priority in their foreign policies”, he added, hailing the cooperation as “a corner stone for maintaining peace and stability in the entire world”.

“Today we held intensive talks that included members of the government and the chief executives of major companies,” Putin said. “We arrived at the common opinion that the Russian-Chinese strategic partnership has acquired impressive dynamics in almost all areas.”

The decision was made to increase supplies of Russian wheat to China and talks on the authorisation of other grain crops to enter the Chinese market are at the final stage, Putin said. The issue of cancelling China’s import restrictions for Russian meat and poultry products was also discussed.

Overall, exports of Russian agricultural products to China surged 17% and reached $1.6bn in 2016, according to the Russian president. Bilateral trade turnover increased by 4% to $66bn. At 37%, growth was notably higher in the first four months of this year, reaching $24.5bn.

However, “the agreements come at a time of growing scepticism in Moscow over the benefits of its relationship with Beijing”, the Financial Times commented about the visit, noting that Russian government officials and corporate executives have complained that economic ties have failed to keep up with the closer political relationship.

“If it took them five-and-a-bit years to invest $1bn in 19 projects, it’ll take them 50 years to spend $10bn,” Alexander Gabuev, a specialist in Russia-China relations at the Carnegie Moscow Center, told the newspaper, referring to previous RFDI deals with CDB and China Investment Corporation.