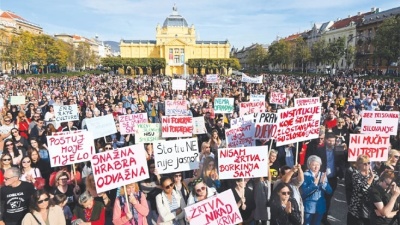 Thousands of people protested in the Croatian capital Zagreb after five suspects in gang rape case were released
By Clare Nuttall in Glasgow October 21, 2019

Thousands of people protested in the Croatian capital Zagreb and other major cities on October 19 after five suspects in a case concerning the gang rape of a teenage girl were released. According to the organisers around 7,000 people turned out in Zagreb alone.

Gender violence is a contentious political issue in Croatia where currently the Criminal Code distinguishes between two separate offences – rape and the lesser crime of “sexual intercourse without consent”, which carries considerably shorter sentences. Changes to the law to abolish the “sexual intercourse without consent” offence are being discussed.

The suspects, all aged either 19 or 20, were accused of repeatedly assaulting the victim, who is just 15. According to reports from local media and Croatian activists, over the period of a year they allegedly filmed the abuse on their smartphones and used the footage to blackmail her. They were eventually detained after she told a school psychologist about the attacks.

Their release by a judge in a Zadar court sparked widespread condemnation, including from Croatia’s President Kolinda Grabar-Kitarovic.

“I call on the relevant institutions and society as a whole to take special care in the fight against all forms of violence, especially violence in which victims are minors,” the president tweeted on October 14.

“We must not turn a blind eye to the violence in our society, as this will further abuse the victims,” she added.

The suspects have since been taken back into custody, but protests went ahead nonetheless in several major Croatian cities on Saturday under the banner "Pravda za Djevojcice!” or “Justice for Girls!”

“By releasing suspects of these serious crimes, the judiciary threatens the safety, life and dignity of the victim. We urge you to speak out loud against a system that supports violence. Impunity is a crime!” said the Solidarna Foundation on its Facebook page, where it also issued a list of demands including the transfer of the trial from the Zadar court and amendments to the Criminal Code to abolish the category of “sexual intercourse without consent”.

However, Justice Minister Drazen Bosnjakovic said on October 19 that the court proceedings in the case should be left to the judiciary, state news agency Hina reported.

A report on gender-based violence released by international human rights watchdog Amnesty International on October 17, amid the furore over the rape case, said that the country’s existing legislation does not effectively criminalise rape.

“In practice, the introduction of a separate offence has had a highly detrimental impact on the prosecution of rape, with most cases of marital rape and other cases of rape qualified and prosecuted as “sexual intercourse without consent” and the perpetrators sentenced to the minimum penalties of six months or less,” said the Amnesty International report.

However, changes are in progress, and in September the government announced a public consultation period for proposed amendments to the Criminal Code that would abolish the separate offence of “sexual intercourse without consent” and redefine the act as rape.

“It is to hope that this week’s protests and public outcry will be a turning point for Croatia’s treatment of rape and sexual violence. Impunity is a crime,” commented Jelena Sesar, a researcher at Amnesty International, in a tweet on October 19.

Croatia has made some progress on addressing gender based violence during the last year, according to the Amnesty report, notably the ratification of the Istanbul Convention, which condemns all forms of violence against women and domestic violence. However, highlighting the politically charged environment surrounding gender issues, adoption of the convention by the centre-right government sparked protests in Croatia and contributed to a dip in the ruling Croatian Democratic Union’s (HDZ’s) poll ratings.