Yandex.Market lays out its strategy for the future

Yandex.Market lays out its strategy for the future and it is ambitious. Russia's retail business is rapidly going into the cloud
By bne IntelliNews October 13, 2020

Russia’s leading e-commerce companies have reached critical mass and are in the process of creating a new economy that will shift much of Russia’s GDP into the cloud.

In the last months the big three – Ozon, Yandex and Sberbank – have announced plans that accelerate and crystalise their businesses going from sites that just sell things to entire ecosystems that become a market in their own right.

A string of deals has been announced and, in Ozon’s case, an IPO is on the cards later this year to raise more money to pay for the work.

Russia’s economy may have been battered by the coronacrisis and GDP growth will be lackadaisical at best, but e-commerce continues to grow in double digits and is set to account of all retail turnover within the next four years, according to Sova Capital. And rate of growth of the biggest companies is far in excess of the sector as a whole, with all the leading players reporting growth on the order of 80% a year. If anything, the coronacrisis has only catalysed the shift from bricks and mortar retail to e-commerce, accelerating the pace of change. 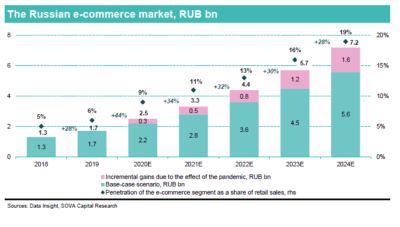 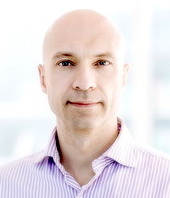 Interfax published an interview with Yandex.Market CEO Maxim Grishakov on 12 October where he goes into some detail of Yandex’s plans for its market place. Below is a write-up published by Sova Capital drilling into some of the details.

Strategy remains intact. As part of its strategy until 2023, Yandex.Market seeks to (1) start generating a positive adjusted EBITDA; (2) become one of Russia’s top three e-commerce players; and (3) expand its assortment to 5mn SKUs. As a reminder, this strategy was announced in late June as part of YNDX’s purchase of SBER’s stake in Yandex.Market, and the e-commerce platform will be fully consolidated in YNDX’s Q3 financials starting from 23 July.

Faster decision-making. According to Grishakov, Yandex.Market’s decision-making has become faster and less bureaucratic following the separation from SBER. Prior to cutting ties with SBER, Yandex.Market had its own BoD representing both YNDX and SBER that approved key decisions on a quarterly basis. At present, YNDX’s executives approve most decisions in real time, enabling Yandex.Market to move faster. Only major strategic decisions still require approval by YNDX’s BoD.

Gross merchandise value (GMV) growth. Yandex.Market’s growth peaked in April-May at 200-220% year on year, occasionally reaching 300% during that period. Summer tends to be slow for Russian e-commerce players, but sales were supported this year by fewer shoppers going on vacation. The re-opening of offline stores created a headwind. According to Grishakov, growth is currently reaccelerating, but visibility for the rest of the year is limited given the uncertainty around a second wave of coronavirus (COVID-19) and possible containment measures. Yandex.Market is working to prepare its logistics for the high season, which could be abnormally high this year if strict lockdowns are re-imposed.

Scaling logistics to keep up with rapid GMV growth. Yandex.Market continues to open sorting centres in Russia’s large and mid-sized cities and towns. It also plans to open 8,000-10,000 pickup points in Russia’s primary regions. Yandex.Market uses third-party courier services and has its own courier platform that launched in November 2019. The platform currently covers Moscow, St. Petersburg, Krasnodar and Rostov, with other 1mn+ cities in the pipeline. The in-house courier platform is successfully leveraging YNDX’s navigation services for real-time routing optimisation.

Yandex.Market is piloting on-demand delivery in collaboration with Yandex.Lavka, which is part of YNDX’s Taxi vertical. On-demand delivery means that when a customer makes a purchase with next-day delivery, the purchase comes to a sorting centre that night. The following day, the customer opens an app and orders delivery for exactly when he or she is ready. The delivery should then take no more than 15-20 minutes. Regardless of whether this particular pilot project takes off, we see considerable scope for synergies between YNDX’s e-commerce and mobility verticals.

Expanding assortment. Yandex.Market’s product range includes 1.5mn SKUs, up from 900,000 in May. The product range should reach 2mn by YE20, as Yandex.Market is adding new merchants to its platform. Grishakov sees the 2023 target of 5mn as “valid”.

Small market share and large ambitions. In the words of Grishakov, Yandex.Market’s marketplace currently holds only 1-2% of the Russian e-commerce market, while the company’s price-comparison platform accounts for around 15%. Grishakov did not quantify where he sees Yandex.Market’s share in 2023 (remember that the company wants to be in the top three), but he expects there to be two to three huge marketplaces and a number of specialist and niche players.

Grishakov reiterated that the Beru brand will be retired. Both the marketplace and price comparison platform will now operate under the single Yandex.Market banner.

Legal structure optimisation. After cutting ties with SBER, YNDX has been optimising the legal entities making up Yandex.Market to reduce the number of intercompany transactions and to simplify processes.

Yandex.Market employs around 1,500 office staff and is hiring new people in logistics.

Yandex.Market IPO off the table. We understand that Yandex.Market now relies on YNDX for financing, and it sees no point in holding an IPO as a separate business.