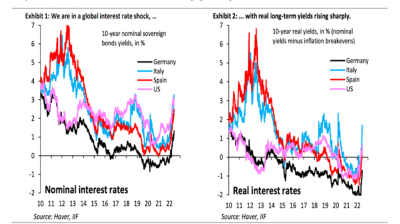 The world is being hit by and inflation shock that central banks are struggling to contain and threatens to turn into stagflation. Used to high inflation, most EM central banks started tightening monetary policy earlier than the developmarkets, but with mixed success. / wiki
By Ben Aris in Berlin June 20, 2022

The world’s economy is being hit by an inflation and interest rate shock that shows no sign of abating, Institute of International Finance (IIF) said in a recent paper.

“We are in a global interest rate and high inflation shock. Longer-dated government bond yields have risen sharply across advanced economies, tightening financial conditions, weighing on growth and pushing up risk aversion,” Robin Brooks, managing director and chief economist at the Institute of International Finance (IIF) said in a note together with economists Jonathan Fortun and  Jack Pingle.

“This is also weighing on flows to emerging markets, with our high-frequency flow tracking across the world’s biggest EMs registering outflows similar in scale to the RMB devaluation scare in 2015 and 2016," Brookes et al said.

Inflation has soared around the world and especially in developing markets. Even in the relatively mature and well-run Central European markets, inflation is starting to run out of control as sharp interest rate hikes in those countries have failed to curb inflation’s explosive growth.

Czechia, in particular, has seen inflation soar into double digits to levels not seen since the early 1990s, despite aggressive hikes by the central bank. Moldova’s inflation climbed to 29% in May. Slovakia’s inflation hit a 22-year high and Romania, Poland and Bulgaria, to name a few more, are all suffering from double-digit rates of inflation.

The spike in inflation has been blamed on supply chain disruptions caused by the coronavirus (COVID-19) pandemic and then exacerbated by the food shock associated with the war in Ukraine. The World Bank downgraded its global economic outlook in May to 2.9% for this year, but warned that the world is facing a real danger of stagflation.

But we are not there yet, says IIF. Central banks in the emerging and developing markets have been pushing through rate hikes and as bne IntelliNews reported in a survey of negative real interest rates – the precursor to stagflation – about half of the countries in Emerging Europe have negative rates in single digits, which means central bank still have the ability to bring inflation under control with some more aggressive rate hikes.

“All that said, we are not that bearish on EM. Most of the big emerging markets started hiking well ahead of advanced economies, which now leaves real longer-term interest rates across many EMs well above their G10 counterparts,” Brookes et al said. “That provides some protection from this global interest rate shock.”

However, as the bne IntelliNews survey showed, the other half the countries in Emerging Europe have negative interest rates in double digits, which means the size and frequency of rate hikes ahead will be very painful for these countries, which will almost certainly face recession in the next few years as they battle to bring inflation down.

“There are obviously pockets of weakness in EM – where real interest rates are deeply negative – and risks for these countries are rapidly mounting. We see these instances as idiosyncratic, however, and not emblematic of a broader emerging markets problem,” Brookes said.

As both the World Bank and IIF report, the current inflation shock is the most serious since the 1970s, but at the same time the shock is not as big as the previous episode and central banks are much better equipped to deal with it, especially after the pioneering work of the New Zealand central bank in the 1970 that was the first to adopt inflation rate targeting.

“The world is experiencing one of the biggest interest rate shocks in recent memory. That’s not quite so obvious looking at longer-dated nominal interest rates, but is very clear looking at real yields, which have risen substantially,” Brookes said. “The real 10-year Treasury yield in the US is up from -1.1% at the end of last year to +0.7% now, a bigger rise than during the 2013 “taper tantrum.” Higher-debt countries are getting hit even harder. Italy’s real 10-year yield has risen from -0.7% at the end of 2021 to 1.8% now, a very sharp – if orderly – repricing.”

Rising interest rates in the developed markets are bad news for emerging markets as this typically sucks money out of them as capital seeks the safer havens of advanced economies that begin to pay more attractive returns.

“Interest rate shocks therefore historically have generated outflows from EM and this is indeed what we are seeing,” Brookes said. “Our high frequency tracking of non-resident portfolio flows across some of the biggest emerging markets is seeing outflows that are comparable in scale to the 2015/6 RMB devaluation scare, with outflows concentrated on non-China EM. Meanwhile, flows to China have resumed so far this quarter, though they are weaker than in the past, something that dates back to the start of the war in Ukraine.”

The leading emerging markets has bought themselves some protection, as they were quick to spot the inflation problem and started rate hikes early. The first to move was Ukraine with a reversal of its easing policy in March 2021 with a 50bp hike, after a series of sharp cuts as the economy began to grow in 2019.

The Central Bank of Russia (CBR) followed a few weeks later with a 25bp hike also in March – the first since 2018. CBR Governor Elvia Nabiullina began to warn that inflation was persistent and a bigger problem than most central bankers believed and began a string of increasingly aggressive hikes to head the problem off. Before the war in Ukraine knocked Russia’s economy sideways, she was widely seen as having successfully contained inflation and had halted the tightening cycle, as inflation was expected to start falling again. In general, the EM central banks have been well ahead of the tightening curve, whereas the DMs are behind the curve.

“Indeed, the normalisation in longer-term real rates is something that is mostly a story for advanced economies, while longer-term real yields – in much of EM – normalised in 2021,” says Brooke. “Of course, there are exceptions. Emerging markets where inflation is running well ahead of monetary policy have real rates that are deeply negative. Those EMs now face increasing challenges and will likely experience further – perhaps substantial – depreciation. However, we see such countries as idiosyncratic and not emblematic of a broader vulnerability across EM.”

The birth of a Kazakh banking empire: ATF Bank
14 hours ago
CEPR's action plan for Ukraine's wartime economy
1 day ago
Missiles or sabotage: What caused the explosion at the Russian airbase in Crimea?
4 days ago
Population decline to take Emerging Europe back to the early 20th century
4 days ago
Czech government remains colour blind on green issues
4 days ago