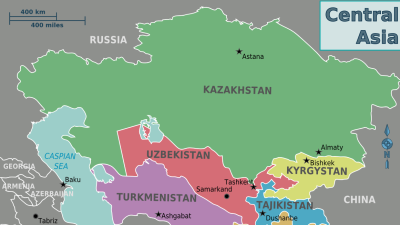 Damaging slowdowns and contractions triggered by the coronavirus (COVID-19) pandemic will hit Central Asian economic growth this year with the region’s largest economy, that of Kazakhstan, set to contract by 0.8%, according to the World Bank’s Europe and Central Asia Economic Update for Spring 2020.

The new projection for oil-export-reliant Kazakhstan (which compares to the 3.7% predicted by the World Bank in its last economic update, issued last October) is largely seen as a consequence of anticipated substantial declines in global demand for crude oil and manufactured goods as COVID-19 outbreak mitigation measures drain consumer demand and investment. 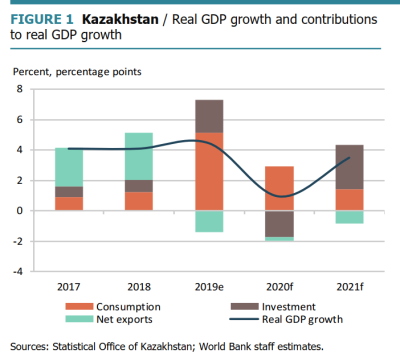 “Measures to contain the virus outbreak are likely to moderate business activities in Almaty and Nur-Sultan. To contain the rapidly expanding coronavirus the authorities implemented extreme measures by locking down the country’s two key cities. Prior to the COVID-19 outbreak the draft budget for 2020 assumed a slight increase in the deficit, but now considering plummeted oil prices and the standstill in economic activity the deficit is likely to be significantly higher,” the economic update report said.

A $10bn fiscal stimulus package, announced earlier by the Kazakh authorities, will be equivalent to 5% of Kazakhstan’s GDP—recorded at $170.9bn in 2019 when the economy grew at 4.5%. A large part of it is expected to come from central bank resources and state-owned enterprises rather than from the central budget, the report noted. Nevertheless, the authorities intend to reallocate budget resources to the sectors most in need under current circumstances. Included will be additional spending on health, social assistance, infrastructure and subsidies for small and medium sized enterprises.

The economic update also noted: “A further drop in business activities will significantly deteriorate the balance-sheet of firms, undermine the ability for households to repay loans, which in turn increases the risk of higher NPLs [non-performing loans].

“While the authorities have not disclosed plans to tap into its Oil Fund reserves so far, the deeper shortfall in tax revenues from economic fallout might require additional resources to be deployed. The county has the fiscal ability to raise revenue either through external borrowing or additional transfers from rainy-day fund.”

The World Bank, meanwhile, sees the pandemic as a “severe disruption” to Uzbekistan’s $58bn economy and the country’s transition to a market economy. On latest estimates, growth is projected to reduce sharply to around 1.6% in 2020 (October forecast was 5.6%) as a result of significantly lower “external trade and widespread domestic economic disruption”. 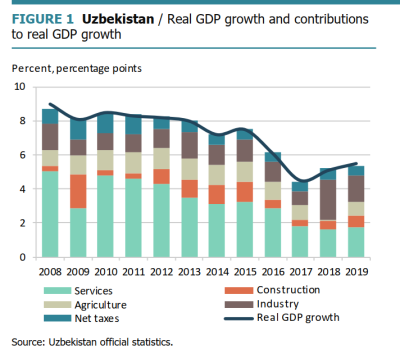 The update noted: “The economic outlook has substantially worsened as a result of the COVID-19 crisis, creating challenges to the market transition and creating a high risk that poverty levels will rise. Anti-crisis policy measures and the drawdown of Uzbekistan’s strong buffers will be critical to help offset the worst effects of the crisis, especially on the poorest citizens.”

It added: “Stay-at-home orders and non-critical business closures are now in place across the country. It is uncertain when these restrictions will be lifted as efforts intensify to reduce local transmission. An increasingly likely downside scenario is that more prolonged disruption could contract the economy in 2020. On the positive side, demand for gold and food exports is projected to remain robust, but it may be subject to significant price volatility,” the report said.

“Annual inflation is expected to be 15.8 percent in 2020 as a result of supply chain disruptions and higher food prices. The current account deficit is expected to widen to around 8.5% of GDP in 2020 due to a sharp contraction in external trade and remittance inflows. A drawdown on reserves and development partner assistance is expected to finance the deficit,” the report said.

The government recently announced a $1bn package to increase health and social spending, and ease tax, debt, and cash flow constraints on businesses—the measures are set to help temper the negative effects of the crisis on households and companies.

However, in its outlook on Uzbekistan the update concluded: “The COVID-19 outbreak is the biggest threat yet to Uzbekistan’s ambitious market transition. Promising signs of private sector growth and job creation in tourism, horticulture, and services are now at risk. These sectors are among the worst affected as the crisis has wiped out the tourist and high-value horticulture export seasons. Efforts to attract foreign investment—through PPPs and the imminent launch of an ambitious SOE reform and privatization strategy—will be disrupted by the highly uncertain economic conditions.

“Remittances, a vital income source for many of the poorest households, are projected to fall by more than 50 percent. Lower remittances, rising unemployment, and inflationary risks from a sustained COVID-19 outbreak pose a significant threat to poverty reduction. Uzbekistan’s macroeconomic buffers, safety nets, and community institutions; and anti-crisis policy measures, are expected to help mitigate the worst effects of the crisis on the poor.”

Kyrgyzstan is projected by the update to see only 0.4% of GDP growth in 2020 (October forecast was for 4%) compared to last year’s 4.5%. The pandemic and weakening growth in Russia following the oil price crash in early March will take a hefty toll, the World Bank anticipated. Russia is both a major trade partner and source of remittances to the country of 6.4mn, which in 2019 had an economic output of $8.5bn. 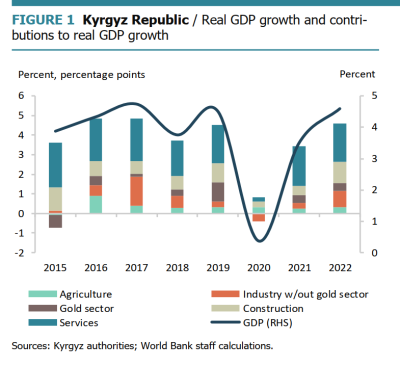 “The COVID-19 outbreak is reducing trade, transport, and tourism as well as domestic activities that are dependent on inputs from China. Gold production is expected to remain at the same level as in 2019 with the reduction at the Kumtor gold mine to be offset by a new gold project Djerooi,” the report said. “Assuming the containment of the outbreak in the second half of 2020, GDP growth is forecast to rebound to 3.5 percent in 2021 and 4.6 percent in 2022.”

The update added: “In the short term, the closure of the border with China in late January 2020 is likely to have a severe negative impact on small- and medium-sized businesses in trade, construction, and textiles if the disease lasts longer. COVID-19 poses a considerable risk to fiscal revenue. According to the authorities, the revenue losses might be as high as 6.5 percent of GDP for the full year.

“Over the medium term, the Kyrgyz Republic's economic performance will continue to be vulnerable to developments in its major trading partners. A slowdown in Russia or Kazakhstan could negatively impact the baseline scenario through remittances and trade. Fluctuations in commodity prices could have a mixed impact on export receipts and the import bill.”

Central Asia’s poorest country, Tajikistan, similarly finds itself heavily dependent on Russia for both trade and remittances, while of course it is also exposed to the global economic impacts of the pandemic. The World Bank predicts GDP growth falling to 1.7% or lower in 2020 (October forecast was for 5.5%). It expects a sharp decline in “trade and lower commodity prices, a likely large drop in remittances, and worsened prospects for transport and tourism industries”. Moreover, Tajik growth will likely remain weak at around 3.5% in 2021-22 supported by public investment ahead of Tajikistan’s commemoration of 30 years of independence in 2021, the World Bank noted. 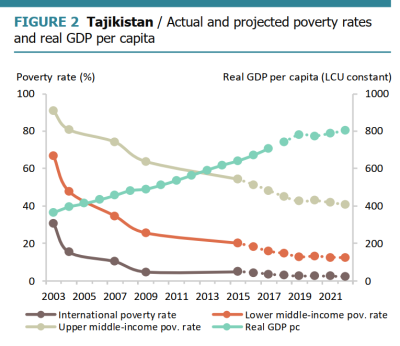 “The fiscal deficit is expected to widen to more than 5 percent of GDP in 2020 as a result of lower revenues and increased spending on health, social transfers. The revenue shortfall will mirror the high share of VAT and trade taxes in total tax revenue and Tajikistan’s greater reliance on imports originating from China. The expected increase in public spending in 2020 is likely to reflect social support to mitigate the loss of household incomes,” the report added. “After a one-off surge in the fiscal deficit in 2021, the deficit needs to be reduced in the subsequent years to ensure debt sustainability.”

Looking at risks and challenges in the country’s growth outlook, the update said: “Structural challenges in the Tajik economy also weigh on the country’s development prospects. Governance issues in the state-owned enterprises—including in key sectors of the economy—present high quasi-fiscal risks and threaten the sustainability of the public finances. Delays in implementing much-needed structural reforms to improve the business environment will continue to hinder private sector development.

“The construction of the Rogun HPP [hydro power plant] from budget proceeds continues to present a serious risk to macro-fiscal sustainability and further crowd-out social spending.

The World Bank did not assess economic prospects for Turkmenistan.