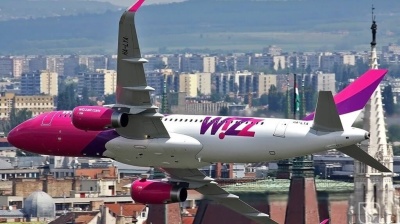 Hungary's Wizz Air carried 2.38mn passengers in August, down 41% y/y as the pandemic continued to impact the travel industry, data released by the low-fare airline on September 3 show.

Wizz Air had cancelled most of its Budapest flights, continuing to operate ones to twelve destinations, down from 73 earlier. More flight cancellations are expected in the coming week, according to the spokesperson of Budapest.

The ban on entry by foreigners, with some exceptions, was issued by the government in response to an increase in the number of coronavirus cases, many originating abroad.

Hungary announced to close its borders to foreigners from September 1 for a one-month temporary period. Hungarians returning from a foreign country must produce two negative COVID-19 tests, 48 hours apart, to be exempted from a mandatory 14-day quarantine. Hungary gave exemptions to V4 countries, which triggered a response from Brussels.

Liszt Ferenc International operator Budapest Airport expects daily passenger numbers to reach 3,000 at most after a ban on entry into Hungary by most foreigners was introduced on September 1, the company's communications director said on public television on Thursday. The number is down from 13,000-14,000 per day in August.

Budapest the second-biggest airport in the countries that joined the EU in 2004 after Prague. The airport operator reported massive growth since 2012. Passenger traffic doubled in eight years to a record 16.2mn in 2019 ranking BA as the fastest growing airport in the region.

According to data from the Centre for Aviation CAPA, traffic reached 3.2mn at the end of July, down a whopping 64% y/y.