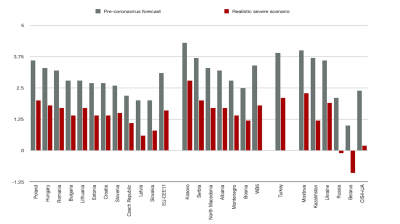 wiiw's real GDP growth forecasts for 2020 in the CESEE region.
By Clare Nuttall in Glasgow March 17, 2020

2020 is expected to be the worst year for economies in Central, Southeast and Eastern Europe (CESEE) since the global financial crisis of the late 2000s, according to radically revised economic forecasts from the Vienna Institute for International Economic Studies (wiiw).

A growing number of countries across the region are already on lockdown as governments seek to contain the spread of the coronavirus (COVID-19). While no country in the region has yet seen an outbreak on the scale of those in China, Italy or Iran, the number of infections are increasing rapidly day by day with a knock-on effect on economies.

“The fallout from the coronavirus is already impacting production networks, and substantially restricting activity in sectors such as tourism, aviation, energy and manufacturing. Reported cases in Europe are increasing daily, and economic life is heavily disrupted,” says the report from wiiw released on March 17.

The think tank has prepared four scenarios for the economic impact of the coronavirus, ranging from its pre-coronavirus baseline, to a ‘mild’ (best-case), a ‘medium’, and a ‘severe’ (worst-case) scenario.

However, wiiw economists warn, “given the events of recent days, the ‘severe’ scenario has become the most likely”. Under this scenario, wiiw projects that the spread of the virus can be contained by mid-2020, and that a strong and co-ordinated policy response is enacted by the world’s major economies.

This would see growth in the CESEE region slump to just 1.1% in 2020, lower than in any year since the global financial crisis.

Should the crisis last longer or governments of major economies fail to respond sufficiently, “then the economic fallout will be even more negative and longer lasting,” wiiw warns.

In terms of geography, wiiw forecasts that the CIS countries and Turkey would be worst affected, with the EU member states and some Western Balkan countries faring relatively better.

“EU member states in the region are generally wealthier, have better healthcare systems, and will have more scope to enact expansionary fiscal and monetary policies to offset the downturn.

"On aggregate, wiiw’s projections indicate that the negative economic consequences of the coronavirus for these countries will be less severe than in the rest of CESEE,” says the report.

“By contrast, the ability of countries in the Western Balkans, Turkey, the CIS and Ukraine to counteract the economic downturn will be limited by considerations of macro-financial stability and less fiscal room for manoeuvre. These countries also generally have worse healthcare systems.”

But the structure of each country’s economy is also a factor: "Countries reliant on energy exports (Russia and Kazakhstan) or tourism (Croatia, Slovenia, Albania and Montenegro) are likely to be badly affected,” says wiiw.

Looking beyond 2020, wiiw has kept its outlook broadly unchanged, but it warns of downside risks depending on the scale of the policy response and how quickly the virus is contained. With global growth already weakening before the start of the current crisis, wiiw anticipates economic growth of under 3% in EU-CEE in 2021-22, and only slightly stronger in the Western Balkans. 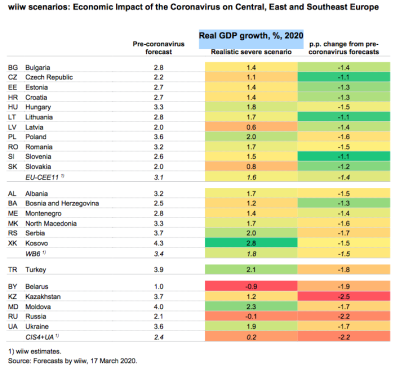