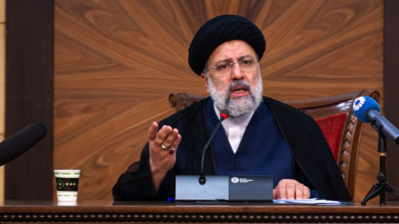 Ebrahim Raisi, the conservative head of the judiciary, who is frontrunner to be Iran’s next president.
By Pooyan Tamimi Arab & Ammar Maleki June 11, 2021

The Islamic Republic of Iran has never organised free and fair elections since its establishment in 1979. By definition, the combination of modern totalitarianism and Iran’s Islamic theocracy, with a supreme leader, cannot allow for more than a voting spectacle, rather than elections in the normal sense of the word.

Yet, a majority of Iranians have used the platform of an election to make their presence felt. They did this in 1997 with the rise of the so-called Reformists, in the disputed 2009 elections that were followed by mass protests, and in 2017 when the current president, Hassan Rouhani, was re-elected with a turnout of more than 70%. However, the population’s mode of expression has now shifted. Many Iranians say they will refuse to participate in the upcoming elections, hacking at the regime’s sole remaining pillar of legitimacy.

Rouhani is standing down after serving two terms and presidential elections are taking place on June 18. The frontrunner is Ebrahim Raisi, an ultra-conservative and head of the judiciary who is responsible for ordering the execution of several thousands of political prisoners in 1988. Iran’s Guardian Council, a body of 12 members appointed by the supreme leader, Ali Khamenei, and the head of the judiciary, Raisi himself, must approve the candidates. Among those rejected were former president, Mahmoud Ahmadinejad.

Our research institute, the Group for Analyzing and Measuring Attitudes in Iran (GAMAAN), conducted an online survey between May 27 and June 3 on the upcoming vote. The results show that the Islamic Republic is facing its lowest turnout ever, with only 25% of respondents saying they would vote. 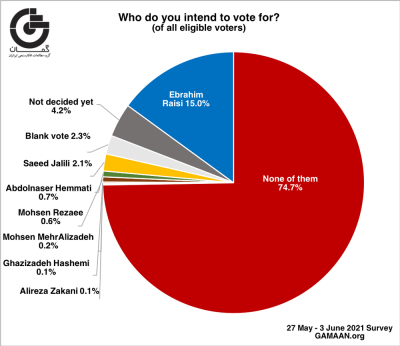 Our estimated turnout is lower than the official numbers published by the state-run Iranian Students Polling Agency (ISPA), which predicts a turnout lower than 40%. The discrepancies are likely to be caused by the differences between traditional telephone and on-site sampling on the one hand, and the less charted territories of online sampling, on the other.

From research in other authoritarian countries such as Russia and China, we know that respondents are much less willing to answer truthfully when they are reached using conventional, offline, survey methods. Inflated polling numbers can then be used to validate potentially fraudulent results to give autocrats an air of respectability.

Iran’s internet penetration rate is comparable with Germany. According to the most recent statistics, there are 77 million mobile internet subscribers and roughly 74% of Iranians over 18 use at least one social media platform. So it’s possible to reach a substantial percentage of Iranians online and ask about their views.

We have conducted several such surveys on religion, capital punishment, and media popularity, gaining insights into Iranian internet users’ behaviour that help target an appropriate range of digital channels spread across the country.

After cleaning the data for our most recent survey, we were left with a sample of 68,000 Iranians living in Iran. The sample was weighted and balanced to the target population of literate Iranians aged above 19, using five demographic variables, voting behaviour in the 2017 presidential elections, and new survey data on political preferences.

Crucial for the weighting is the participation of pro-regime respondents, whose absence would skew the results. In this survey, we attracted 9,000 respondents who voted for the conservative candidate, Raisi, in the 2017 elections.

The meaning of not voting

What can explain the turnout drop, from over 70% in 2017 to an expectation of less than 30% today? The vast majority of our respondents, 71%, said the main reason they were abstaining was because of “the unfree and ineffective nature of elections in the Islamic Republic.” Only 7% reported the Guardian Council’s recent “disqualification of my preferred candidate” as their reason. 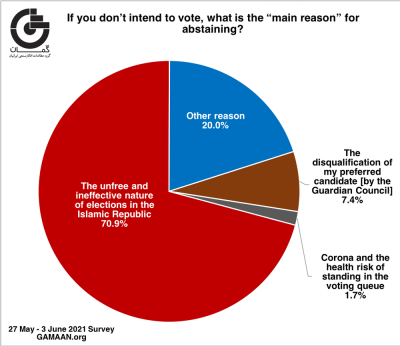 A lack of free and fair elections is keeping voters away from the polls. GAMAAN, Author provided.

In another survey we conducted in April 2019, 79% of respondents said they would vote no to the Islamic Republic in a free referendum. This was before the bloody crackdowns in November that year which led to the death of an estimated 1,500 people, and before the Islamic Revolutionary Guard Corps admitted shooting down a Ukrainian passenger airline in 2020.

Our latest results show that the majority’s desire to get rid of the theocratic system hasn’t changed. Around half of the population supports regime change as a precondition for meaningful change, and a quarter supports a softer transition away from the current system. Only 8% explicitly supported the Islamic Republic by identifying as Reformist, and only 13% saw themselves as Principlists, who support the Islamic Revolution and the supreme leader. 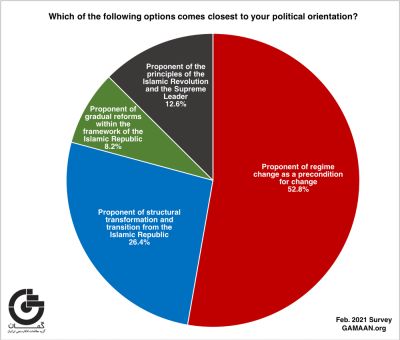 A majority of Iranians think change can only come with regime change. GAMAAN, Author provided.

We are not the only group with such findings. A recent state-run survey revealed that Reformists and Principlists together have about 20% of supporters. The respectable World Values Survey conducted an on-site survey in Iran in the summer of 2020 and found that the Principlists’ base was no larger than 16%.

Worried about the expected low turnout, the supreme leader hurried to describe the act of voting as a religious duty. But if Iranians’ political disenchantment has turned into religious disappointment, with millions abandoning or changing their faith, the leader has turned the elections into a test of the nation’s religiosity. It is this entanglement of religion and politics that is at the heart of Iranians’ discontent, and which the regime’s mismanagement and corruption and the economic sanctions have only exacerbated.

Like other authoritarian regimes, the Islamic Republic needs a high enough turnout so that its foreign minister can sell an image of a legitimate government abroad. By boycotting what are nothing but staged elections, ordinary Iranians are refusing to participate in this political theatre. It’s time the international community recognised their will to effect a real change in Iran. 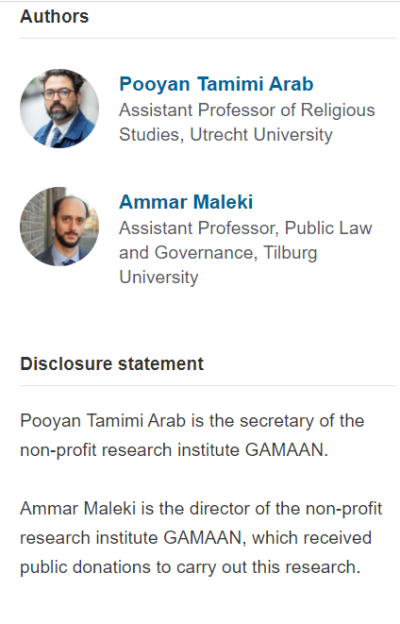