When China stops sneezing: easing of international trade war to put Mongolia’s growth back on track 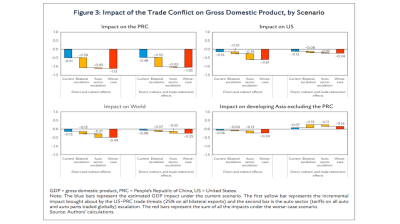 As indications grow that an easing of tensions in the year-long trade war between the US and China is imminent, export-dependent Mongolia can expect to avoid a projected dampening of GDP growth that would have followed a worsening of the trade war.

Mongolia would be among the worst hit economies in developing Asia should the trade war between China and the US deepen. A new study by the Asian Development Bank (ADB) finds that in the worst case scenario of an all-out global trade war, the landlocked Central Asian nation would suffer an impact in lost growth and increased unemployment second only to that expected to fall on China.

The trade war started over a year ago when the US imposed 20% tariffs on imports of large residential washing machines and 30% on solar panels, following this up with tariff hikes for steel and aluminium. Other major economies followed with their own protectionist measures, but in the second and third quarters of 2018 the conflict became increasingly bilateral in nature, according to the ADB. 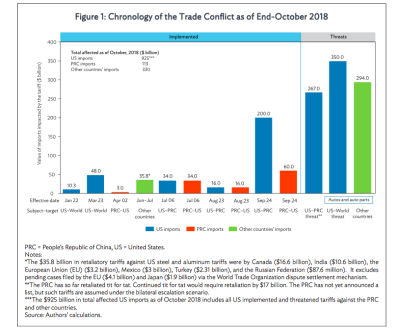 “Under the current scenario, both the PRC and the US are negatively affected, with a larger impact on the PRC … The trade measures already implemented would lower GDP in the PRC by 0.5% relative to what it would have been in the absence of any trade conflict,” says the report. 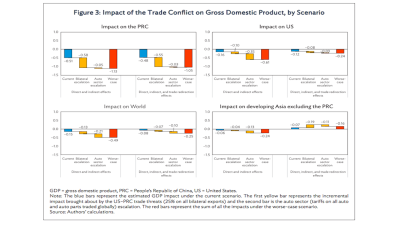 It would also have spillover effects on other developing Asian countries, notably Mongolia. The landlocked Central Asian country would see a negative effect of -0.3% on GDP under bilateral escalation or worst case, and even the current situation wold lead to a -0.1% GDP impact. Should the situation worsen, a negative impact of 1,000 is expected on employment. Trade is also expected to take a hit of between -0.1% and -0.5% depending on how the trade war plays out.

Mongolia’s economy is heavily intertwined with that of China, one of its two superpower neighbours. Trade with China accounts for approximately 60% of Mongolia’s total trade, while trade with Russia makes up another 15-20%. Rising coal exports, mainly to China which has replaced North Korean coal shipments with Mongolian coal, were the major driving force behind Mongolia’s recent increase in exports that helped its ongoing recovery, though Mongolia is also an exporter of other mineral products.

The anticipated impact on Mongolia is still small compared to that on China. ADB economists expect a -1.1% impact on China's GDP in the worst case (which now looks unlikely) or -1.0% in case of an escalation in the bilateral trade war; even a the continuation of the current situation entails a -0.5% impact. The effect on unemployment ranges from an extra 3.5mn unemployed under current conditions to a many as 8.6mn under the worst case scenario.

On the other hand, most countries in developing Asia would actually benefit in case of a deepening of the conflict. “Allowing for trade redirection, the net effect on the rest of developing Asia turns mildly positive, at 0.07% under the current scenario and 0.16% under the worse-case scenario,” the report says. “The economies in the region that stand to benefit the most are, in descending order, Viet Nam (+2.14%); Malaysia (+0.46%); Taipei, China (+0.42%); and Thailand (+0.22%) because they produce and export goods that compete with products from economies affected by the tariffs.” In Kazakhstan and Kyrgyzstan, the only other Central Asian nations included in the report, the impact of a deepening in the trade war is expected to be marginally positive.

There is now speculation that the trade war could be coming to an end; like the western sanctions on Russia, the steps taken by the US have reverberated on US companies. There have been several rounds of talks recently, and US President Donald Trump has announced that he expects to meet with Chinese President Xi Jinping in March.

Commerzbank analysts point out, however, that resolving the situation will not be easy: “We remain sceptical that a trade agreement, even if can be reached, will be implemented smoothly,” said an analyst note. “What happened over the past months actually indicates that the relationship between the US and China is far more fragile than a lot of people thought.”

“While a trade deal between China and the US is seemingly on the table, there are still many existing issues that can’t be bridged over the short period,” a second Commerzbank analyst note said at the end of February. “Latest news points out China has made some concessions to lower the import barriers for farm goods, but on other critical issues including forced technology transfer there is little progress being made. That said, if President Donald Trump wants to make the deal happen sooner rather than later, he has to make some compromise as well (which he won’t acknowledge for sure).” 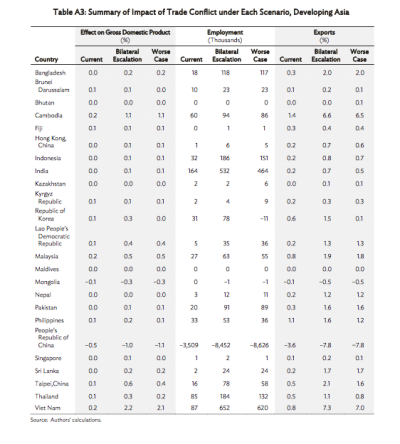 Corona vote gambles pay off for incumbents
Mongolia to go ahead with Naadam festival, but with no tourists
The bubonic plague has swapped its rats for marmots in Mongolia where two cases reported