What will Belarus gain from the proposed merger with Russia? 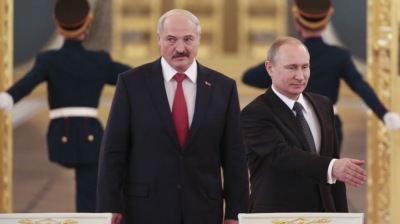 Russian President Vladimir Putin and Belarus' President Alexander Lukashenko failed to agree the details of a mooted Union State deal that will bring their countries closer together after five hours of talks on December 7.
By Ben Aris in Berlin December 12, 2019

Russian President Vladimir Putin met with his Belarusian counterpart Alexander Lukashenko on December 7 to try and bring their two countries closer together into a single market modeled on the EU. The two strongmen could not finalise a deal after five hours of talks and they agreed to meet again on December 20, but some sort of deal is very likely to be agreed. What does Belarus stand to gain from the tie-up?

The change has already proven to be controversial. On the weekend that Putin and Lukashenko were meeting a 1,000-strong crowd demonstrated in the Belarusian capital Minsk against the integration, which they fear will mean a loss of sovereignty for Belarus.

Russia watchers are highly suspicious of the deal as well, believing it is simply a ruse by Putin to create the conditions for changes to the Russian constitution that will nix the two-term limit on Putin and allow him to stay in office beyond 2024 when he is constitutionally required to stand down.

The Kremlin’s line is the talks are simply a part of developing the Eurasia Economic Union (EEU), which was set up by the Kremlin in a mirror image of the EU. Putin has said many times that his long-term foreign policy goal is to create a single market “from Lisbon to Vladivostok”. While there is no chance that Russia can join the EU, in theory the EU and EEU could do a deal to integrate their markets much more closely and the EEU was designed with this goal in mind, EEU council board member and one of the union’s architects Tatyana Valovaya told bne IntelliNews in an interview in 2012 “The Common Economic Space: like the EU but better” when the multilateral body was being set up.

"We were trying to copy the European Union," said Valovaya, who did much of the negotiating for the Russian side in establishing the EEU. "We are extremely grateful to the EU for its problems, as they have taught the lessons we need to make the Common Economic Space a reality."

The short explanation is the EEU is supposed to provide, like the EU, a common economic space that allows for the free movement of capital, labour and goods under a unified regulatory regime that will allow business to work more efficiently and cheaply for everyone’s benefits.

How does it work?

The trade advantages for Belarus are pretty clear. Russia is already its largest trade partner accounting for 42% of exports and 56% of imports, reports The Bell, and removing the border can only improve both the volume of trade and its profitability. Belarus is a lot less important to Russia and accounts for only 5% of both its imports and exports.

But trade is not the key issue as Minsk receives billions of dollars of hidden subsidies from Moscow that have allowed Lukashenko to more or less preserve the better and more popular parts of the cradle to grave support the Soviet Union offered. And that has made Lukashenko genuinely popular as Belarus managed to avoid most of the pain and economic chaos of the 1990s following the collapse of the Soviet Union in 1991. Between 2005 and 2015 Russia poured $106bn into the Belarusian economy, according to the International Monetary Fund (IMF). Over the years, Russian support has accounted for between 11% and 27% of Belarusian GDP.

The difficulty the two partners are now facing is that Moscow is  proposing to wean Minsk off these subsidies completely and Lukashenko is facing an existential crisis as his political model will no longer work if he doesn't receive Russia’s extra cash. Russia is in the process of implementing the so-called tax manoeuvre that will in effect make Minsk pay international market prices for oil and gas imports from Russia and shave several billion dollars of income off its budget revenues as a result.

In 2011-2016 Belarus received $48.4bn from Russia due to duty-free sales of oil and gas discounts, but that is about to disappear completely in the next few years. Lukashenko wants Moscow to pay him compensation for the lost revenues and Putin has refused. Specifically in 2018 the tax breaks on oil and gas imports were worth $4.3bn or about 8% of GDP.

Minsk said that in six years the country will lose $10bn from the tax manoeuvre. The problem is so severe that the IMF warned earlier this year that Minsk better have a “Plan B” in case Moscow refuses to either soften the terms of the tax manoeuvre or give Minsk some extra cash.

Russia is also ending the discounts on gas prices. Like Ukraine, Belarus has a gas deal that is due to expire on January 1, 2020 under which it only pays $127 per 1,000 cubic metres against the European average price of $169.8 this year – and even that is currently at a 15-year low. Again like Ukraine, there is a row going on over the renewal of Belarus’ oil and gas contracts that is going down to the wire: with two weeks left there is still no agreement on the terms of renewal. Neither prices nor volumes for 2020 are agreed.

Financially Belarus is heavily dependent on Russia, doubly so as Minsk has consistently rejected doing a deal with the IMF as it refuses to accept the reform strings attached to any IMF package. As of June 1, 2019, Belarus owed Russia a total of $7.52bn.

Economically the two countries are joined at the hip. In the last few years it has been hard to find a country that was growing more slowly than Russia, but Belarus managed it. Since 2011, the average GDP growth in Russia was to 1.5%, while that in Belarus was only 1.1%.

The Belarusian stagnation was due to the falling export of refined oil products. While Belarus has zero oil deposits it does have two modern oil refineries that were completed in the last years of the Soviet Union that have remained a significant money earner for the small republic.

But the combination of a decrease in the export of Belarusian oil products to Europe, the contamination of crude passing through the Druzhba oil pipeline earlier this year, a drop in world oil prices and Russia's tax manoeuvre have all combined to hit Belarus hard.

Next year will not be any better: the IMF is forecasting an increase in Russia’s growth rate to 1.8% for 2020-2024, but a further slight slowing of the Belarusian economy by 0.05% in the same period. The rest of emerging Europe is expected to grow by 2.5%.

Russians are better off than Belarusians in terms of GDP per capita earning $27,147 and $19,959 in 2018 respectively in purchase price parity (PPP) terms. That makes the Russians the best off population in the Commonwealth of Independent States (CIS) but places Belarus second.

These results show that the unification talks will be crucial for Belarus’ outlook in 2020. In the short term Lukashenko has to find some way of replacing the subsides that Russia is proposing to remove but in the medium to long term he clearly has to change his economic model and open the country up to reforms to encourage business. Hooking the Belarus economy in more tightly with the much larger and much more vibrant Russian economy is a solution to this problem, but it runs against the grain for Lukashenko.

Russian publication Life.ru published a review of the weapons and equipment in the Belarusian riot police’s arsenal. Some of the materiel is getting its first use as Minsk is gripped by the biggest mass protests since independence in 1991.

What's in Belarusian riot police's arsenal?
6 hours ago
Belarus economy increasing well managed, but remains vulnerable to external shocks
9 days ago
TURKEY INSIGHT: With the lira through the looking glass, global finance questions whether Erdogan can sell eurobonds
10 days ago
Tajikistan: Coronavirus brings bonanza of aid, but zero accountability
11 days ago
After reopening, Armenian economy continues to struggle
11 days ago