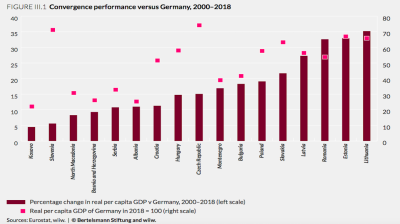 Neither regional integration nor closer ties with the EU have led to increased trade, investment or overall prosperity in the Western Balkans, says a new report from the Vienna Institute for International Economic Studies (wiiw) and Bertelsmann Stiftung.

“Almost without exception, the Western Balkan countries have recorded the worst rates of economic convergence with Germany over the past 20 years in the whole of Central and Eastern Europe … This is despite the fact that, in 2000, most of the Western Balkan countries were much poorer than even Bulgaria and Romania, and that, all else being equal, poor countries tend to grow faster than rich ones,” said the report. 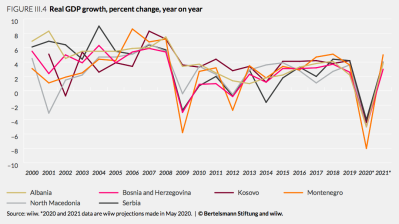 "The gap with the new EU members in Eastern Europe has widened, which is worrying. After all, poor countries should grow faster than rich ones," said Richard Grieveson, deputy director of wiiw and co-author of the study.

On top of this, there has been a “huge brain drain” from the region. Between 2000 and 2019, the populations of Serbia and Bosnia & Herzegovina decreased by over 7%, and Albania’s by more than 6%. The report cites a wiiw study that projects that the working-age population of all Western Balkan countries will shrink by between 17% in Montenegro to around a third in Bosnia by 2050.

“These figures point to the limited prospects and lack of hope regarding the future among much of the region’s population,” said the report.

Despite the signing of stabilisation and association agreements with the EU, exports to the bloc increased by less than a quarter over the last two decades, while foreign direct investment (FDI) from the EU grew by about 46%.

According to the report, there have been benefits from increased trade. The bilateral trade agreements concluded between the countries of the Western Balkans in the 2000s raised exports to the region by about 14%. These were replaced by participation in the Central European Free Trade Agreement (CEFTA), which increased intra-regional exports by 38%. Moreover, if Serbia, which conducts most of its foreign trade with the EU, is excluded, the increase was around 70% for both.

However, according to wiiw and Bertelsmann Stiftung, the increase in regional integration has not had much impact on economic development.

“The region's GDP is still very low – about the same as Slovakia's overall. So the potential gains from increased regional trade have hardly materialised,” said Grieveson.

There had been expectations that regional co-operation, a key part of the EU’s strategy towards the Western Balkans for well over two decades, would be helpful politically and economically. The strategy was based on assumptions that convergence would lead to a greater readiness to peacefully resolve political conflicts, as well as preparing the region economically for EU accession.

However, this has been less successful in the Western Balkans in the past two decades than in Western Europe since 1945, the two think-tanks said. There has not been an economic catch-up, and conflicts, notably those between Serbia and Kosovo and within Bosnia, have not been resolved. Instead, the report argues that parts of the former Yugoslavia are still defined by the “geography of animosity”, a term coined by Vladimir Gligorov, senior research associate at wiiw and country expert for Western Balkan states.

“The EU's previous strategy of using regional economic integration to push the economic catching-up process of the Western Balkan states and resolve political conflicts has not been successful,” said Stefani Weiss, EU expert at the Bertelsmann Stiftung in Brussels.

The report describes successes in infrastructure as “modest”. While the Western Balkan states have been successfully connected to the trans-European transport and energy networks, the report says there are “still large gaps, not least in the area of high-speed internet”.

He argued it is a question of geopolitics. “Ultimately, the EU has to make a very simple geopolitical choice: does it really want to integrate the Western Balkans or continue to have it as a contested zone on its doorstep where Russia and China also exert their influence?” said Weiss. “Precisely because full accession is becoming increasingly distant for most of them for political reasons, Brussels must offer them an alternative."

Ahead of the EU-Western Balkans Summit in Ljubljana, Grieveson argued that the €9bn economic and investment plan from the EU, which is supposed to attract billions of euros in private investment, will “do little to change the deplorable economic situation in the Western Balkans, but will bring ‘more of the same’ instead”.

The report recommends the deepest possible economic integration for the Western Balkans with the EU, including opening EU cohesion and structural funds and other financial instruments to the Western Balkan states. Other options would be integration into the EU Customs Union and an expansion of the existing stabilisation and association agreements.