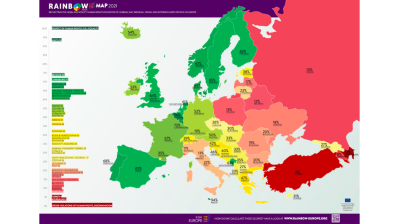 Several countries from the Western Balkans have made reforms positively affecting LGBTI people, while Montenegro has the best legal and policy environment for LGBTI people in the emerging Europe region, according to the latest Rainbow Europe Map and Index from International Lesbian, Gay, Bisexual, Trans and Intersex Association in Europe (ILGA-Europe).

The LGBTI rights organisation ranks 49 European countries based on the legal and policy situation of LGBTI people in the annual index. The latest, published on May 17, reveals that in the last 12 months advances in LGBTI rights have come to “almost a complete standstill”, with the lack of progress “an unprecedented year in the map’s 12-year history”.

“It is deeply worrying to report an almost complete standstill on LGBTI rights and equality, especially at such a critical time for LGBTI communities. In the past year, we’ve seen increased political repression against LGBTI people, a stark rise in socio-economic hardship, and the spreading of LGBTI-phobic hatred on the streets and online across the region”, said executive director of ILGA-Europe, Evelyne Paradis, commenting on the report.

“Against this backdrop, the response from governments has to be more and better concrete action, to make sure people are more protected, not less. The human rights of LGBTI people simply cannot be something that you drop when circumstances are challenging.”

Achieving 63 on a scale from 0% (gross violations of human rights, discrimination) and 100% (respect of human rights, full equality), EU candidate country Montenegro is the top ranked country from the emerging Europe region and is only outperformed by 10 West European countries (Malta, Belgium and Luxembourg top the list).

The report does, however, point out that legislative processes have stalled in Montenegro over the last 12 months – which saw a new government installed in December after months of negotiations. Countries like “Montenegro have to make sure the laws they [have] adopted effectively come into force, while many more know what they can and need to do to make sure their laws and policies have the desired impact for LGBTI lives,” says the report.

All of the aspiring EU members from the Western Balkans thus do better than many of the established EU members, with Poland performing particularly badly.

“Poland’s civil society space has shrunk more this year, because people are being actively attacked by the police during public events, instead of being protected. Poland also lost points related to freedom of expression, due to the anti-LGBT resolutions that have been passed by local governments,” said the report.

The four worst ranked countries on the index – Azerbaijan, Turkey, Armenia and Russia –  were all from emerging Europe.

Also from the region, Georgia dropped by 3.73% on the index due to the lack of a clear procedure for legal gender recognition and the risky situation of LGBTI human rights defenders, while Ukraine losing 3.5% points as the government’s action plan expired.

An earlier report from ILGA-Europe showed a “stark rise” in abuse and hate speech against LGBTI people in the Europe and Central Asia region, including from politicians in 2020. This happened in multiple ways, from the use of emergency powers by governments – notably in Hungary – to hack away at trans rights, to the exclusion of LGBTI people from coronavirus (COVID-19) support packages.