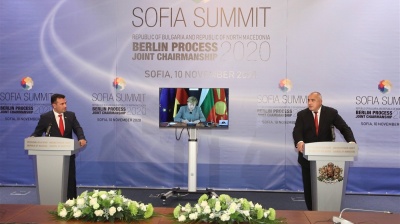 The six Western Balkan states committed to the green agenda and to set up a regional market in two declarations signed during the summit in Sofia on November 10, which is part of the Berlin Process initiative.

The leaders of the Western Balkan countries pledged to support common initiatives aimed at improving the potential of the region. They also agreed on Common Regional Market (CRM), which should lead to deeper regional economic integration.

Albania, Bosnia & Herzegovina, Kosovo, Montenegro, North Macedonia and Serbia also adopted an action plan for the period 2021-2024, which is based on the EU four freedoms, the government in Sofia, which was a co-host of the summit along with North Macedonia, said in a statement.

The second declaration on the green agenda aims to align the six countries to the EU policies that are directed towards climate neutrality.

Despite co-hosting the summit, the prime ministers of Bulgaria and North Macedonia, Boyko Borissov and Zoran Zaev, reportedly failed to make a breakthrough on the issues that could delay the launch of EU negotiations with North Macedonia.

Earlier in November, Bulgaria put the first veto on the start of North Macedonia’s EU membership negotiations at the meeting of the committee of the permanent representatives of member states to the EU (COREPER) after Bulgarian ambassador Dimitar Tsanchev rejected the negotiation framework.