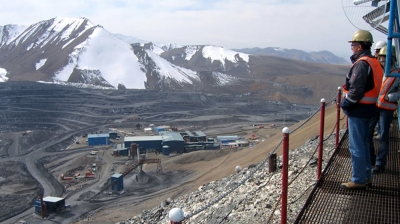 The Kumtor open pit gold mine generates around a tenth of Kyrgyzstan's GDP.
By Kanat Shaku in Almaty October 7, 2020

Kyrgyzstan has seen a wave of attacks on foreign-owned gold mines across the country amid the nationwide political unrest-turned-coup that is ongoing in response to the weekend's disputed parliamentary election results, according to both local reports and foreign media.

Much of the political violence directed at the gold mines was intertwined with longrunning anger among Kyrgyz citizens who perceive foreign-owned entities as unduly benefitting from Kyrgyzstan’s natural resources at the expense of the population. The country is home to flagship open pit gold mine Kumtor, operated by Canada’s Centerra Gold, which is the single largest contributor to the Central Asian nation’s GDP, of which it generates around one-tenth.

Kyrgyzstan is also developing the Jeruy project, expected to enter production this year with the goal of eventually reaching 5.5 tonnes of annual output. Jeruy’s gold reserves are estimated at 88 tonnes and ore mining has already started at the deposit. The Russia-owned Alliance Altyn, the operator of Jeruy project, set to be the country’s second largest gold producer, had to suspend mine development works on October 6 after intruders smashed and torched facilities at the site, the company said.

“Work has been suspended due to the unauthorised entry of unknown people onto the mine’s territory. More than 50 people arrived in cars. We were forced to suspend work for safety reasons,” a spokeswoman for Alliance Altyn was quoted by Reuters as saying. She noted that the intruders set fire to the gold extraction plant and smashed up offices in administrative buildings. Alliance Altyn is controlled by Russian mining company Vostok-Geoldobycha.

The Kumtor mine remained untouched as of October 6. It is located in a remote mountainous spot 430 kilometres away from the Kyrgyz capital Bishkek, the epicentre of the unrest and attempted coup that is playing out. Centerra Gold confirmed that operations at Kumtor continued uninterrupted amid the political upheaval. The company said it was monitoring political developments to ensure conditions remained safe for transporting people and supplies to the mine.

Mines that have been affected by the countrywide unrest included the Bozymchak copper and gold mine, which saw its production suspended on October 6 by the mine’s operator, London-listed Kazakh miner Kaz Minerals.

The Ishtamberdi mine operated by China’s Full Gold Mining has been seized by 300-400 local residents, according to Kyrgyz media reports. Unverified sources claimed that the Chinese workers and staff were chased away from the mine’s territory, according to the reports.

At the Jamgyr gold deposit, operated by Global Jamgyr Mining and funded by Kazakh investors, locals reportedly took some of the workers and staff hostage.

Another Chinese-owned gold project, Kichi-Chaarat, tightened security at its mine, anticipating riots by the locals.

Government agencies and Kazakh-Chinese companies are using the pandemic to shield themselves from scrutiny.