Warning signs of a downturn in Slovenia’s construction sector 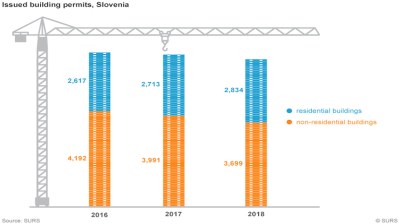 The number of building permits issued decreased in 2018: a sign that the growth trend in the construction sector could be reversed soon.
By Valentina Dimitrievska in Skopje August 13, 2019

The Slovenian construction sector posted growth in all areas in 2018 and 2017, but turnover has not yet returned to where it was in pre-crisis times ten years ago, the statistics office said on August 13.

According to the analysis, some indicators show that the growth trend will be reversed in the near future.

Construction was one of the sectors that was hit the most by the economic crisis ten years ago. While others sector such as industry, trade and services have already exceeded the pre-crisis turnover, construction is still far behind the growth recorded in other activities, the statistics office said.

The largest share of turnover (over 49%) was recorded in 2018 in specialized construction activity, followed by the construction of buildings with almost 30% and civil engineering with almost 21%.

The confidence indicator in construction (comprised of the overall order books and employment expectations) already indicates a further decline in this activity, as in the first six months of 2019 the indicator was constantly lower than the average of the previous year.

“At the expense of the small number of workers, labour productivity increased and amounted to €24,925 in 2018, exceeding the values before the economic crisis. A slightly different picture is presented by the data on issued building permits and the confidence indicator in construction, which can be used as a kind of predictor of the future situation — in these two cases, the growth trend has already turned downwards.”

In 2018 construction contributed almost 7% of the generated value added, amounting to almost 1.7bn. This share has been constantly slowly increasing since 2015. For comparison, in the period before the economic crisis hit in 2008, construction accounted for almost 11% of the total value added.

The average gross earnings in construction in 2018 were 23% lower from the Slovenian average.

Construction activity is often dependent on weather conditions, but in the past few years in most cases the highest growth has been observed in October and November, while the lowest was in January and February.