Von der Leyen says EU has to deliver on enlargement 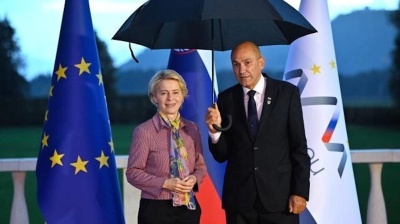 The summit in Brdo pri Kranju was an opportunity for the EU and Western Balkan leaders to discuss the stalled EU enlargement process. EU leaders reaffirmed their support for enlargement, but they did not set any firm timeline.

In September Slovenia, as the current holder of the rotating EU Council presidency, proposed that enlargement with the Western Balkans countries finish by 2030, but it was not taken seriously by other member countries.

“We want the Western Balkans in the European Union.  There cannot be any doubt that our goal is enlargement,” von der Leyen said.

"But, in the meantime, the EU has to deliver. And in particular, the lack of a decision for opening the negotiations with North Macedonia and Albania is jeopardising our standing and our leverage in the region," she said.

“Our credibility as a partner is at stake,” the European Commission's head said.

Sofia and Skopje at odds

Regarding Bulgaria’s veto on the start of accession talks with North Macedonia, von der Leyen underlined that the Commission is doing “intensive work” to find the key issues in the bilateral issues between Sofia and Skopje that will lead to practical steps to finding a solution.

Bulgaria vetoed the launch of EU accession talks with North Macedonia at the end of 2020 over historical and language issues. This also blocked Albania’s EU path, as the two countries were coupled in the process.

Zaev said that if the EU declarations are not translated into action, irreparable damage will be done to the European idea.

One is Bulgarians to be listed in North Macedonia's constitution alongside with other minorities. In the previous census in 2002, only 0.07% of the population declared themselves to be Bulgarians.

Bulgaria claims that there are around 120,000 Bulgarians living in North Macedonia, but most are Macedonians who took Bulgarian passports to be able to work in EU countries.

Radev also asked North Macedonia to recognise the “historical truth” and change its history textbooks in relation to Bulgaria.

Zaev said the steps Radev is taking on behalf of Bulgaria are an insult to Macedonian citizens.

“I have a mandate to create solutions, but not to justify the policies of the last century,” Zaev said.

However, he added that the talks with Sofia would be intensified in the next period. He is still optimistic about the possible start of the EU accession talks by the end of the year, even being disappointed by Bulgaria.

Ahead of the meeting, Albanian Prime Minister Edi Rama blamed the EU's internal fights for the stalled enlargement process.

"We have learned not to expect anything," Rama said.

Meanwhile, von der Leyen praised last week's EU-mediated agreement between Kosovo and Serbia, which ended a crisis between the two sides, saying it is an “excellent message” to the region that it is possible to find solutions by sitting down at the negotiating table.

So far, only Serbia and Montenegro have launched EU accession talks. Bosnia & Herzegovina is a potential candidate and Kosovo is still not recognised by five EU member states.

Regarding the Economic and Investment Plan for the Western Balkans, von der Leyen said that it is at the core of EU engagement along with the region and common regional market. €9bn has been put on the table in grants, and the EU says it can leverage up to €30bn.

She praised reforms undertaken by the Western Balkan countries, but added that it is important to stay the course on reforms in key areas such as justice, the fight against corruption and organised crime, media freedom and economic reforms.

In response to the pandemic, von der Leyen said that the EU provided €3.3bn to the region to address the emergency and to secure 2.9mn COVID-19 vaccines.

During the summit, the European Investment Bank (EIB) president Werner Hoyer underlined the support for the EU integration of the Western Balkan region, sustainable recovery from the COVID-19 pandemic and as well as for green and digital transformation.

EIB investments will be in line with the EU's Economic and Investment Plan for the region.

Under the Team Europe initiative, the EIB intends to contribute to the rollout of this important plan with extensive financial and advisory support. This aims to accelerate the preparation and implementation of key projects for sustainable connectivity, digitalisation and a green transition that will help mitigate and adapt to the impact of climate change.

"This plan allows for EU norms and standards to be embedded in the region — before EU accession. This will expedite the socio-economic integration of countries within the region and their integration with the EU. It will ensure quality investment and transparency, through rigorous procurement requirements," Hoyer said.

Since the onset of the pandemic, the EIB has allocated €715mn to the private sector under the Team Europe initiative to help save jobs and businesses, accelerate recovery and the transformation to a green and digital model.

In 2021, the EU bank has already signed projects worth close to €600mn, which is expected to unlock €1.2bn of investments.