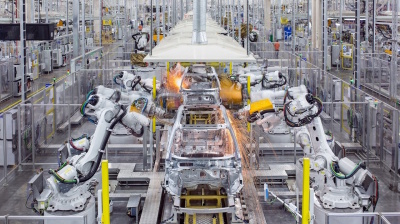 Volvo Cars is to build its first new European manufacturing site since 1965 near Kosice, in eastern Slovakia, which will be focussed on electric cars. / Volvo Cars
By bne IntelliNews July 1, 2022

Slovakia – already the world's largest car manufacturer per capita – has won a fifth big car plant with the decision by Swedish car producer Volvo Cars to build its first new European manufacturing site since 1965 near Kosice, in eastern Slovakia, which will be focussed on electric cars.

The €1.2bn plant, which should start series production in 2026, will have an annual capacity of up to 250,000 vehicles, helping the carmaker achieve its goal of selling 1.2mn cars a year globally in the second half of the decade, which it aims to meet with a global manufacturing footprint spanning Europe, the US and Asia.

"I appreciate that Volvo Cars has decided to build its new plant in Slovakia. The new Volvo Cars plant is important for us since it will improve the social and economic situation in the region and produce only electric cars, which provides the Slovak automotive industry with a competitive perspective in the new ecological era,” said Prime Minister Eduard Heger.

Volvo, owned by China's Geely, will be the fifth car company to build a car plant in Slovakia and thus can benefit from a well-established automotive supply chain. Slovakia, which has a population of five million, already hosts car assembly plants of Jaguar Land Rover, Kia, Stellantis and Volkswagen.

The Volvo plant will also build the next generation of electric cars, quelling fears that Slovakia might be left behind by the shift away from petrol and diesel engine cars.

"We have a clear focus on becoming a pure electric mobility brand by 2030, which is in line with our purpose,” said Jim Rowan, chief executive at Volvo Cars. “Expansion in Europe, our largest sales region, is crucial to our shift to electrification and continued growth. I am very pleased to expand our Volvo Cars production footprint into Slovakia and look forward to welcoming new colleagues and partners on the journey ahead," he added.

"We look forward to welcoming new members to the Volvo Cars Kosice team and the global Volvo Cars family, as well as establishing new collaborations and partnerships in the region,” said Javier Varela, chief operating officer at Volvo Cars, adding that this will be a modern workplace, in a state-of-the-art plant that centres on sustainability and safety.

In line with Volvo's goal to implement climate-neutral production processes by 2025, the Slovakia's plant will use only climate-neutral energy, with the highest global standards of energy and environmental efficiency. It will also be highly automated.

The company has an adjacent site lined up for future expansion, the Financial Times reported, and also has an area on the site that it can use for a battery factory if needed. Volvo already plans to assemble the battery packs, as well as the electric motors, within the new Slovakian car plant.

One fifth of the investment should be covered by state support. As stressed by the company, the incentives offered by the Slovak government have also been a key factor in the decision to locate the plant in the deprived region around Kosice.

"Personally, I am very pleased that Slovakia has succeeded in the competition for this mega investment, which will bring development and many jobs in the eastern part of Slovakia, with lots of direct and indirect job opportunities,” commented Minister of Economy Richard Sulik.

"My dream has come true. This is something I have been talking about for years, writing in the SaS [Freedom and Solidarity] programme for years as a priority, convinced that it will change the lives of thousands of people and families in Slovakia," he posted on social media.

"The east of Slovakia has had higher unemployment for a long time. Now we have managed to get a huge investment directly into this region, which will bring well-paid and promising jobs not only to Valaliky and Kosice, but to the whole region," said Milan Krajniak, labour minister.

The company said that by picking Slovakia as the location for its new plant, Volvo Cars creates a European triangle of manufacturing covering its largest sales region – complementing the Ghent plant (Belgium) in Western Europe and the Torslanda plant (Sweden) in northern Europe.

Valaliky park near the town of Kosice offers good logistical and transport links to the rest of Europe and access to a good supplier base. The construction of the plant should start in 2023, with installations of equipment and production lines to be set for 2024.

In recent years, major investments in Slovakia have been directed mainly to the west of the country. With the arrival of Volvo Cars, the importance of the automotive industry for the country's economy will increase even more. According to the estimate by Matej Hornak, an analyst at Slovenska Sporitelna, Volvo's investment could push Slovak GDP growth up by one percentage point, while the ramp-up in production could also add a percentage point to growth.

Hornak pointed out that the new investment is good for two reasons, the first is that the factory will be located in easterm Slovakia, which will bring economic growth and jobs to the region, but especially help the least developed districts, which are often in this part of the country. "Previous experience and research show that one job in the car factory has created an additional six jobs in Slovakia, which in this case would bring 15,000-20,000 new positions," he wrote, as quoted by daily Pravda.sk.

The second reason, according to Hornak, is the company's focus on electric cars, which are considered the future of transport and, especially in the context of European efforts for environmental sustainability, bring a longer-term perspective to the Slovak automotive sector.