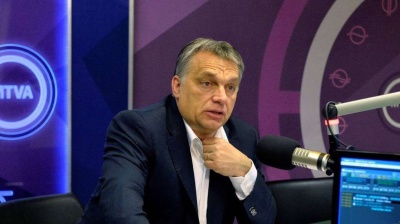 Prime Minister Viktor Orban sets deadline to end special powers granted to his government at the end March
By Tamas Szilagyi in Budapest May 17, 2020

Hungary's government expects to return to parliament a mandate giving it extraordinary powers to manage the coronavirus (COVID-19) crisis by the end of May, Prime Minister Viktor Orban said at a joint press conference with Serbian President Aleksandar Vucic in Belgrade on May 15. The government has also approved the easing of all curfew restrictions in Budapest over the weekend in effect from May 18.

Hungary’s strongman did not make the announcement during his Friday morning interview with state media but presumably wanted to wait to make it during his meeting with the Serbian leader as the legislation granting the government to rule by decrees without a sunset clause has stirred up a heated debate internationally.

Last week European lawmakers urged the European Commission and the Council to proceed with the Article 7 procedure initiated by the parliament, saying that the rule of law deteriorated further in Hungary last month. Orban did not attend the meeting, saying he was too busy fighting the pandemic. Government officials spoke of a witch hunt concerning the debate over the emergency laws.

"We'll give everybody a chance to apologise to Hungary for the unjust accusations and acknowledge the success of Hungary's defense against the coronavirus pandemic," Orban said, referring to criticism concerning the emergency law passed by a supermajority of the ruling Fidesz party on March 30. Many feared that Hungary’s illiberal leader would abuse his power as the extraordinary powers granted to him were without a time limit.

In fact the government has taken a number of contested measures in the last few weeks. One such decree was reducing the ceiling of investments for designing special economic zones from HUF100bn (€282mn) to HUF5bn.

The regulation allows local business tax to be diverted from municipals in addition to the HUF40bn funding taken away from them under the coronavirus bill. The measures allow the government to strengthen its grip on local governments of different political affiliations.

Opposition politicians fear the government is bleeding out unfriendly local governments, which may be part of a wider strategy. Some political analysts did not rule out that Orban is weighing his options to call an early election to catch an unprepared opposition off guard as the economic fallout of the pandemic could hurt the ruling party in the autumn.

Fidesz still maintains a solid near 50% support among decided voters but independent polls show a growing number of disgruntled voters. Another contested decision was the classification of the contract for the Budapest-Belgrade railway reconstruction after calls by the opposition parties to make the investment transparent.

The €2.3bn project on the Hungarian side will be carried out by a Hungarian-Chinese consortium. The Hungarian party in the consortium is RM International, owned by Lorinc Meszaros, Hungary’s most powerful oligarch and a close friend of the prime minister.

Hungary is committed to supporting Serbia’s European integration efforts, Orban said at the international press conference after conferring with Vucic. Hungary is supporting Serbian investments in Hungary and Eximbank has also opened a credit line of €100mn to support cooperation between Serbian and Hungarian companies.

The reconstruction of the railway link has also entered a phase of progress, Orban noted.

"Everyone could see that bringing Chinese goods into Europe would be one of the key questions in the future and that this rail line would help to accelerate this", he said. Orban also unveiled plans for the construction of a joint gas pipeline, enabling a reverse flow of gas to Hungary from Serbia.

During his interview with state radio on Friday, Orban said Hungary has won the "first battle" by slowing the spread of the novel coronavirus in the country and is working to win the "second battle" through measures to preserve and create jobs.

He outlined government measures to keep workplaces and create new ones through investment support and other programmes.

On Saturday, Orban announced the lifting of restrictions in Budapest and said that regulations in the capital will be lifted from May 18. All shops will be allowed to open without time limits and restaurants, cafés and pubs can also reopen their gardens and terraces.

There will be no restrictions on religious services, weddings and funerals and family events with an attendance of less than 200 may be held from June 15. The government has already announced similar measures for the rest of the country two weeks ago.

Hungary has so far fared well in the battle against the pandemic. The number of confirmed cases of the novel coronavirus in Hungary has reached 3,509 as of Sunday. The official data show 451 fatalities, 80% of them in Budapest and in the surrounding Pest county. There are 614 COVID-19 patients being treated in hospital and 46 of them are on ventilators.