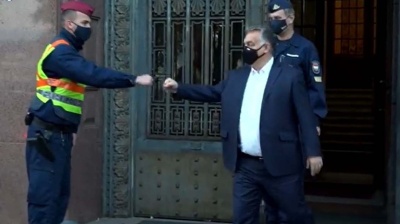 Hungarian Prime Minister Viktor Orban has unveiled the reasons for his decision to veto the EU’s next seven-year budget and the recovery fund that sparked a backlash both at home and from neighbours Czechia and Slovakia.

Hungary was willing to vote for "an economic plan or financial package" to help countries most in need but "we find it unacceptable that such issues should be tied to migration under the pretext of the rule of law”, he said.

Orban has repeatedly used this argument to play down any criticism of the slide in democratic values under his leadership.

The message crafted by Orban's spin doctors claims that Hungary became the target of EU rule of law procedures, such as Article 7 because the country staunchly opposes Brussels’s migration policies. In fact, this has been at the centre of the government’s policies since the 2015 migration crisis.

Hungary received support from other regional countries for opposing migration policies of the European Commission. The countries were referred to the EU court after they blocked the adoption of the mandatory relocation scheme. However, there seem to be fractures in V4 unity on Poland’s and Hungary’s veto.

Many point out that the EU’s budget and recovery package does not have any specific clauses about immigration, which Orban has long opposed as a threat to national and European identity and culture.

On Twitter, the chair of the European affairs committee of the Slovak parliament, Tomas Valasek, called Orban’s comments nonsense.

"The EU budget and NextGenEU say nothing about migration. Slovakia is also opposed to mandatory allocation, yet we support the budget and oppose Hungary’s and Poland’s veto," he wrote.

At a joint news conference on Wednesday, the Czech and Slovak foreign ministers urged swift action to ensure a speedy release of money sorely needed to revive Europe's pandemic-stricken economy.

Opposition parties have condemned the government’s move and in a sign of unity they issued a joint statement.

"We Hungarians have not ended the one-party [communist] regime and joined … the community of European states only for a corrupt, anti-democratic regime to hold Europe and Hungary to ransom, stripping their citizens of the rights and support they are entitled to," the letter said.

Ahead of Thursday’s EU summit French diplomats hinted that leaders are working to could push ahead with the  recovery fund without Poland and Hungary as a last resort.

Poland and Hungary stand to receive at least €180bn in grants between them over the next seven years from the budget and recovery fund, according to Bloomberg calculations.