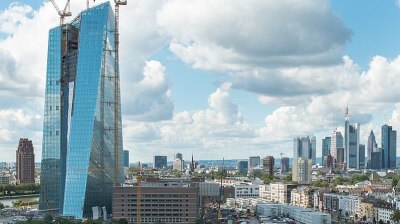 The European Central Bank in Frankfurt, the supranational monetary authority of the Eurozone.
By bne IntelIiNews September 16, 2020

The head of macro strategies at Record Currency Management, which oversees $63bn in assets, is reportedly shorting government bonds of Spain, France and Italy—as well as the euro itself—on the expectation that Turkey’s market ructions will soon be felt on the balance sheets of European banks.

John Floyd, a veteran market player with a quarter-century career behind him and a former Deutsche Bank trader, told Bloomberg on September 15 that he predicted the Asian crisis and the Argentine currency board collapse and now anticipates that the Turkish lira slump and Turkey’s net negative foreign exchange reserves point the way to a trading opportunity in developed markets as the risk of damage from bad loans grows.

Moody’s Investors Service cut Turkey’s debt rating deeper, to a record low level into junk on September 11, stating that a a balance of payments crisis was “increasingly likely.”

“It’s a Turkey trade, but also it’s not just a Turkey issue,” New York-based Floyd was cited as saying in an interview. “Europe is severely challenged. Their economies are weakening, COVID-19 is increasing again, unemployment is very high, debt levels are very high, they are in a straitjacket of being in the single currency.”

Foreign bank exposure to Turkey has fallen since the August 2018 lira crisis, but oversea lenders still had a total of $166bn of claims on Turkey at the end of 2019, with European banks accounting for the lion’s share, according to data from the Bank for International Settlements.

Turkey’s $740bn economy is set to contract this year—from to 2% to 4% according to most latest estimates—while the lira has lost more than 20% of its value against the dollar to date in 2020. The cost of insuring Turkish sovereign debt, meanwhile, has almost doubled.

Floyd was reported as saying that he was basing his bet on an assumption that Turkish borrowers will struggle to pay foreign currency debt because of the slide in the lira, ultimately contributing to an increase in non-performing loans at European lenders.
“The risk of feedback mechanisms from Turkey to Europe exist through European bank exposure in, and to, Turkish banks and corporates,” Floyd, who was chairman and chief investment officer of the Floyd Plus Currency Fund before joining Record last year, was also quoted as saying, adding: “The shock from COVID-19 and the shutdown to GDP has gone far beyond the European Central Bank’s stress tests and thus risks to the banking system are amplified.” The shares of Spain’s Banco Bilbao Vizcaya Argentaria (BBVA), which owns an almost 50% stake in Turkiye Garanti Bankasi, Turkey’s second-largest private bank, are down more than 50% in the year so far.

Shares in BNP Paribas, another European bank with a Turkish unit, have also been under pressure.

Potential protection in the EU’s planned pandemic recovery fund will not stop the deterioration of peripheral economies and meets only 10% of Italy’s financing needs for the next few years, according to Floyd, who concluded in the interview: “Italy, Spain and France have very real challenges. Is this Covid relief package a step in the right direction? Absolutely. Do I think it is enough to solve the problems? No way.”

The latest sanctions imposed on Iran by the Trump administration—said by Tehran to be so ... more

Turkish business daily Dunya on October 5 published an analysis listing Turkish companies that are already facing writedowns from open foreign currency positions due to lira weakness. At the head ... more