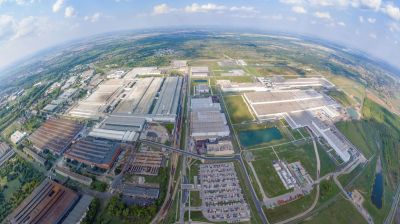 Audi Hungaria develops and produces engines for Audi AG and other companies of the Volkswagen Group in Gyor, Hungary.
By Levente Szilagyi in Budapest September 13, 2019

Industrial output was up by 12% y/y in July, rising at the fastest pace in 28 months, bouncing back from 1.4% drop in the previous month, according to detailed data from the KSH on September 12. Workday-adjusted output climbed 8.7% also in line with the preliminary data. On a monthly basis, output grew by 1.7%.

The surge in output was the result of the low base as the summer shutdown of carmakers led to a sharp decline in output in July 2018.

Hungary has become a centre of vehicle production in Central Europe. It is one of the few countries in Europe, where all three German premium carmakers, Audi, Mercedes, and BMW, have production facilities

Last year’s recess highlighted the risk of the country’s heavy dependence on the vehicle sector, which accounts for 30% of manufacturing output.

The August data will provide a clearer picture about the impacts of weaker growth in the euro area on the Hungarian industry, analysts said. So far Hungary’s industry has shown resilience to the slowdown in Europe, also reflected in growth near or above 5% in the past three quarters.

Industrial output increased by 6.3% y/y in the first seven months, up from 3.9% in the same period a year ago.

The vehicle sector expanded by 34.5%, the strongest growth in years, albeit from a low base. The output of computers and electronics grew 4%.

Industrial exports increased by 12.7% y/y in July as the sale of the automotive sector expanded by 31% and exports of the computer, electronics, and optical equipment sector increased 4.7%. Domestic sales of the industrial sector were up 14.3%.

New order volume increased by 11% as new domestic orders were up by 14.7% and new export orders climbed 10.3%.