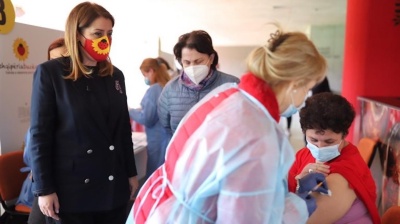 After months of delays, all of the Western Balkans countries have embarked on coronavirus (COVID-19) vaccination campaigns.

Kosovo became the final country in Europe to start vaccinations of its population after receiving the first 24,000 out of 100,800 AstraZeneca vaccines via the COVAX programme on March 28.

Prime Minister Albin Kurti was the first person to get vaccinated to reassure the population that the vaccines are safe.

Through the COVAX facility, UNICEF will procure vaccines for up to 20% of the total population of Kosovo. Some Pfizer vaccines are expected to arrive in Kosovo soon, as part of EU assistance for the Western Balkans. Health workers and the elderly are the first to be vaccinated in Kosovo.

Minister of Health Ogerta Manastirliu said the aim is to reach 10,000 vaccinations per day. The main goal is to break the chain of infections as far as possible in order to have a better tourist season than last year, a government statement said. Prime Minister Edi Rama forecast that half a million Albanians will be vaccinated by May, and the entire population by spring 2022.

Montenegro also received its first vaccines via COVAX over the weekend, as did North Macedonia, where mass vaccinations will start on Mach 31.

“The chronically ill and people over the age of 75, will be the first to be vaccinated with these vaccines,” Health Minister Venko Filipce said on March 28.

"The COVAX vaccines come with weeks of delay, but given that all countries face this challenge, it is good that the system has proven to work," the minister added.

The remaining 76,000 AstraZeneca vaccines via COVAX are expected to arrive in April. The country also ordered 200,000 Chinese vaccines from Sinopharm which are expected in April — after a scandal over procurement of the Chinese vaccine slowed down the process — and the same amount from Russia. North Macedonia initially received 8,000 Pfizer doses as a donation from Serbia and 3,000 Russian vaccines.

Meanwhile Serbia remans one of the most advanced countries in Europe in terms of its vaccination programme, and has helped out several of its neighbours.

Over the last weekend, more than 22,000 foreigners were vaccinated in Serbia in just three days — March 25, 27 and 28, as announced by the director of the Office for Information Technologies and Electronic Administration, Mihailo Jovanovic.

The foreign citizens came to Serbia at the invitation of the Serbian Chamber of Commerce or applied themselves through the eGovernment portal, and received the AstraZeneca vaccine, a government statement said.

Prime Minister of Serbia Ana Brnabic talked of the “picture of solidarity” sent from Serbia to the region by vaccinating citizens of other countries, and said that all those who applied will be invited to come for their second vaccines.

She sought to reassure critics concerned that vaccinating foreigners would take vaccines away from Serbian citizens. According to Brnabic, Serbia would have had to destroy between 20,000 and 25,000 Astra Zeneca vaccines because their deadline expires in early April. Rather than wasting the vaccines, Serbia decided to help the region, so she called on citizens of other states to come for vaccination, said a government statement.

Serbia s now planning to set up production of both the Russian and the Chinese vaccine, with production of the Sputnik V vaccine to start as soon as May at the Torlak Institute of Virology, Vaccines and Sera. Serbia will become the first country in Southern Europe to produce Sputnik V, the Russian Direct Investment Fund (RDIF) announced earlier this month.