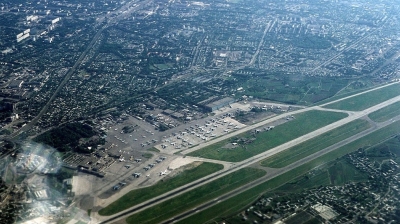 Tashkent International is departing for a location away from the heart of the city.
By bne IntelliNews February 14, 2020

Uzbek authorities are planning to move Tashkent International Airport by 30-35 kilometres to relocate it away from the heart of the capital city, the Tashkent Times has reported, quoting the head of Uzbekistan Airport company, Ravshan Ismailov.

The state-run enterprise plans to “connect” the airport to Tashkent Eastern Airport, a civil aviation airport soon to be built on Tashkent-East airfield. The move is meant to increase Tashkent International Airport’s annual throughput capacity. It is set to surge to 7mn passengers from its current level of 4.5mn within the next two years, the report noted.

“Currently, Tashkent International Airport is located in the heart of [Tashkent]. In the future, it may be moved towards Angren or Chinoz, 30-35 kilometres away from the city,” Ismailov said.

“When it is connected with the new Tashkent Eastern Airport, the throughput is expected to be increased up to 10mn,” he added. “That is why we are considering the construction of a new modern airport with a 50mn passenger-a-year capacity. We will build such an airport outside of Tashkent after 10 years, according to our plans."

Uzbekistan halted air and rail transportation on domestic routes on July 13, a statement from the Ministry of Transport said on ... more

Uzbekistan will impose a second lockdown for several weeks after reporting an increase in new coronavirus (COVID-19) cases, newswires reported on July 8.  Along with other Central Asian ... more