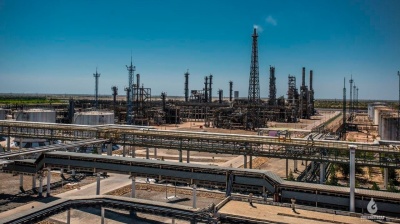 Bukhara's getting some handy new technology.
By Kanat Shaku in Almaty September 9, 2020

Uzbekistan’s Bukhara refinery is to boost its crude oil conversion and produce cleaner-burning Euro 5 standard petrol and diesel fuels with the use of technology from Honeywell UOP.

The refinery comes under the Uzbek government’s multi-year plan to reach national energy independence and raise the country’s export potential. The initiative was started in 2017 when Uzbek President Shavkat Mirziyoyev launched the ongoing efforts to liberalise the country’s economy. Under the Islam Karimov regime that ended in late 2016 with the death of the dictator, the country frequently faced shortages of fuel.

“The Bukhara refinery is revitalising its operations for improved quality and increased production of fuels to meet growing domestic demand for motor fuels,” said Bryan Glover, vice president and general manager, UOP Process Technologies. “The company selected UOP due to its experience in working in the region and its technologies to assist in meeting sustainability goals.”

Also under the contract with Honeywell UOP, the refinery’s diesel hydrotreater (DHT) and amine regeneration unit (ARU) will be revamped to meet new requirements.

The government will in 2023 introduce stricter specifications for fuel products on the market in Uzbekistan, Central Asia's most populous nation with 34mn people.

To address fuel shortages, Uzbekistan began relying on imports in 2017 to bridge the gap; however this has always been seen as a temporary measure that will no longer be necessary upon completion of modernisation works at the country’s three oil refineries. The Central Asian nation is also aiming to boost oil output to help raise fuel production.

Uzbekistan currently produces around 3mn tonnes of oil, all of it covering domestic consumption via conversion into fuels. Last year, the country negotiated enhanced oil recovery projects at some of its oil fields with foreign companies. Uzbek energy authorities are eyeing a threefold increase in oil output per field thanks to these projects, which rely on importing newer more efficient technologies from abroad.

Another ongoing project under the government’s plan is the modernisation of Ferghana Oil Refinery. Last year, the government issued a resolution approving the sale of its 100% stake in the refinery to Indonesia’s PT Trans Asia Resources. The buyer is responsible for attracting funds that will be used “for optimal capacity utilisation” and for modernising the plant’s petrol and diesel production to meet Euro 4 and Euro 5 standard requirements.