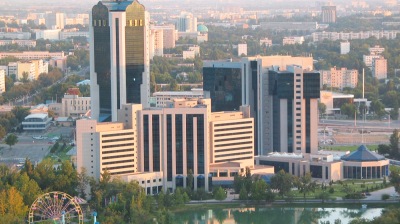 Uzbekistan's growth fell to zero in the first half of 2020 but is expected to recover somewhat in the second half of this year.
By Alisher Kalandarov in Tashkent October 8, 2020

The autumn edition of the World Bank’s Economic Update released on October 7 forecasts that Uzbekistan is one of only two countries in Europe and Central Asia that will see positive economic growth this year as the rest of the world suffers from an economic recession caused by the coronavirus (COVID-19) pandemic.

The pandemic is the most severe crisis Uzbekistan has faced since the economy’s recovery from the breakup of the Soviet Union. It has adversely affected growth and resulted in declines in employment, wellbeing and the incomes of citizens.

Higher gold production and growth in agriculture helped offset a sharp fall in industry and services. Despite a 19% decline in remittances, a cumulative increase of 17% in social payments and a 10% increase in minimum wages since February have helped preserve private consumption.

Lower remittances and a bigger trade deficit widened the current account deficit to 7.7% of GDP in the first half of 2020. Exports fell by 22.6% in the same period, due to global supply chain disruptions and a fall in key commodity prices (natural gas, metals). Imports fell by 15% due to a sharp fall in machinery and capital imports.

Lower revenue collections and large anti-crisis spending contributed to a fiscal deficit of about 5% of GDP in the first half of 2020. About 2.5% of GDP was directed to additional health spending, increases in low-income allowances, support to enterprises, and an expansion of public works. Despite a large revenue increase from higher gold exports, weaker economic conditions and tax deferrals contributed to a two-percentage point year-on-year decline in revenues as a share of GDP.

Annual inflation fell to 11.6% in August allowing the Central Bank of Uzbekistan to cut its policy rate twice in 2020, from 16% to 15% in April, and to 14% in September. Anti-crisis credit lines to firms helped increase credit to the economy by 18% in January-August.

“The COVID-19 crisis in Uzbekistan has almost entirely extinguished GDP growth in 2020, and increased poverty levels for the first time in over two decades. To mitigate the economic, social, and health consequences of the pandemic, the Government has been taking anti-crisis policy measures. Despite the current challenges, the authorities have reconfirmed their strong commitment to continue reforms in key sectors of the economy to achieve stronger growth and improve wellbeing of citizens. This is very important to ensure a more resilient and inclusive post COVID-19 recovery,” noted Marco Mantovanelli, World Bank country manager for Uzbekistan.

Uzbekistan’s outlook remains positive as market reforms continue to shift the economy towards greater resource efficiency and private sector growth. The lifting of lockdowns in the third quarter of 2020, robust agricultural production, and a partial recovery of remittances will result in stronger economic activity in the second half of 2020 in contrast to the first one.

Annual GDP growth is projected between 0.4 and 0.8% this year. That's considerably lower than in 2019, when it reached 5.6%. Uzbekistan along with Tajikistan are the only states among 23 countries in the Europe and Central Asia region that are expected to demonstrate growth in 2020 (Table 1). Assuming that lockdowns will not be reintroduced across the country, GDP growth is projected at between 4.8 and 5.0% in 2021.

Inflation will moderate over the medium term but remain elevated by further price reforms. The current account deficit is expected to be around 6% of GDP in 2020 due to a recovery in remittances and a lower trade deficit. It is projected to remain at this level over the medium term as imports of machinery and equipment resume post-COVID-19. This deficit is expected to be financed by higher public borrowing and gradually by rising foreign investment.

The projected fiscal deficit of 7.5% of GDP in 2020 will moderate in 2021-22 as anti-crisis spending is gradually reduced and revenues recover. It is projected to decline over the medium-term.

The wider deficit in 2020 and the medium term will be financed by increased external borrowing, and public external debt will increase to 34.7% of GDP in 2020. Although the debt has increased since 2017, it is expected to stabilise over the medium term.

bneGREEN: Most green energy beats coal on price in 2020
Amid Afghanistan pullout observers ask if there's a place for a US military base in Central Asia
bneGREEN: IEA calls for $1 trillion of annual investment into clean energy in developing economies