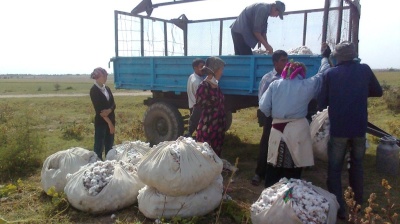 The Uzbek government is withdrawing from the cotton fields.
By Kanat Shaku in Almaty March 10, 2020

Human rights groups suggest that the government-imposed quotas have prompted local officials to maintain reliance on forced labour in instances where they could not find enough willing workers. Mirziyoyev outlined in January how the government was set to phase out its role in cotton and wheat trading in order to open up opportunities for private companies in Uzbekistan, one of the world’s top cotton producing countries. The country, also one of biggest cotton exporters, has been under international pressure to end forced labour for years.

The government has traditionally taken charge of cotton exports. It buys up both cotton and wheat from farmers and directs farms on the volume targets they need to grow each season. Ex-PM Mirziyoyev, who was in charge of managing the cotton sector under the rule of the late Islam Karimov who passed away in late 2016, is now taking steps to phase out this approach. He wants to stimulate private investment in the cotton industry, marking a major policy shift for the ex-Soviet state.

Moreover, by removing the requirements on farmers to grow cotton, Uzbekistan is introducing flexibility in the types of crops they may choose to grow.

The UN’s International Labour Organisation (ILO) said in a recently released report that last year 1.75mn people took part in the annual cotton harvest in Uzbekistan, Central Asia’s most populous country with 33.9mn people. Around 102,000 of harvest workers were victims of forced labour, down by 40% compared to 2018, it estimated.

The UN described this decease as "major progress" since it meant 94% of cotton pickers worked voluntarily, while just a few years ago the entire cotton sector relied on forced labour. The newly signed decree may remove the remaining mechanisms that motivate the continued use of forced labour in the country.

The government aims to domestically process all cotton harvested in the country by 2025. This would theoretically allow Uzbekistan to raise its textile product exports to $7bn per annum, up from $1.6bn in 2018, it says.

In September, Uzbekistan announced a draft law on the Strategy for the Development of Agriculture for 2020-2030. It includes plans to switch the country’s agricultural products to market pricing. The move, including the cotton and grain sectors, will shift prices away from government-set pricing, which has been the dominant model in the country for years.