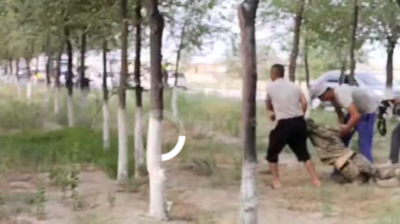 The authorities in Uzbekistan have declared a state of emergency in the autonomous Karakalpakstan region following protests.

The protests in the regional capital Nukus were sparked by planned constitutional reforms in Uzbekistan that if adopted would have removed Karakalpakstan’s right to secession from the amended constitution.

After residents of Nukus took to the streets in protest on July 1, the authorities swiftly backed down.

President Shavkat Mirziyoyev on July 2 said that the amendments altering the status of Karakalpakstan will now not be included in the ongoing overhaul of the constitution.

On the same day, the president signed an executive order introducing a state of emergency that will be in place from July 3 to August 3.

However, videos posted on social media indicated that protests continued over the weekend.

MP Bobur Bekmurodov posted a video on Twitter that appears to show protesters dragging security officers along the ground. The video was posted on July 3 but it is uncle when it was filmed.

Later on July 3, Bekmurodov wrote: “The president is back in Nukus. The situation in the city has stabilised and is returning to normal. The Commandant of the Territory Djuraev reported that the situation is completely controlled.”

The protests started on July 1, when demonstrators marched through Nukus then rallied in the central market. According to a statement from the Karakalpakstan authorities, protesters tried to take over official buildings. Police arrested the protest leaders and others who offered “active resistance”.

The Karakalpakstan region of northwestern Uzbekistan is home to around 2mn people, mainly Karakalpaks, an ethnic group with their own Turkic language. It became part of Uzbekistan in 1936, have previously been the Karakalpak Autonomous Soviet Socialist Republic.

The proposed change concerning Karakalpakstan’s right to secession is part of a broad constitutional reform initiated by President Shavkat Mirziyoyev.

While the region would retain its autonomy under the proposed changes, it would lose its constitutional right to secede on the basis of a referendum of its population.

A statement from Uzbekistan’s interior ministry said a group of Karakalpakstan residents had marched through Nukus and held a rally as “a result of misunderstanding the constitutional reforms”.

Among the key changes are a proposal for the term of office of the president of Uzbekistan to be extended from five to seven years, while previous terms would be nullified. That would allow Mirziyoyev to serve another term as president, after he was re-elected for a second term in October 2021 with a landslide in a largely uncontested race.

The draft law on amending the constitution of the country was submitted for public discussion on June 25. It includes around 170 amendments in total.

Mirziyoyev visited Nukus on July 2, where he sought to reassure residents about the planned constitutional changes, stressing that changes to the constitution will only be made after public discussions and a referendum.

"Only after that will amendments and additions to the Constitution of the Republic of Uzbekistan enter into legal force," he stressed.

"However," he continued, "in some places there are cases of misunderstanding in the interpretation of the importance of this issue. In particular, a group of individuals expressed disagreement with certain norms provided for in the draft and concerning the Republic of Karakalpakstan. As a result, on July 1, they organised demonstrations on the central streets of the city of Nukus. They have made attempts to illegally seize the buildings of local government bodies.

"Dear residents of Karakalpakstan! I repeat, it is the duty of all of us to preserve the centuries-old friendship and brotherhood between the Uzbek and Karakalpak peoples,” the president added.

"We will definitely build a New Uzbekistan and a New Karakalpakstan together!”

However, he also outlined the consequences for protesters.

"At the same time, strict measures will be taken within the framework of the law against any persons currently trying to violate peace and tranquility and public safety. There are enough forces and opportunities in Uzbekistan to ensure the rule 'The law is above all, the punishment for a crime is inevitable'," he said.

Karakalpakstan makes up around a third of Uzbekistan’s territory, though it is mainly desert. To the north lies what is left of the Aral Sea, which started to dry up from the 1960s when Soviet planners diverted the rivers that fed it to irrigate the cotton fields of Central Asia. This had devastating implications for human health and the economy in the region that still reverberate today.

“In a glimpse, the protests are a marginal crisis in a marginal part of Central Asia. The region is among Uzbekistan's poorest and least populated. Yet the decision to end Karakalpakstan’s autonomy and its consequences point to how essential the Autonomous Republic is to Uzbekistan – even more so now that the decision seems to be undone. Without Karakalpakstan's continued existence as an autonomous entity, Uzbekistan would be transformed into a different state,” wrote an academic and contributor to Riddle Russia, Ivan Kłyszcz, on Twitter.

“Namely, it would change the way a third of Uzbekistan's territory is governed. Due to the paramount strategic value of Karakalpakstan's location, the implications of such shift would be profound.”

Unauthorised protests are banned in Uzbekistan, where despite the reforms made following the death of long-term leader Islam Karimov in 2016 and his replacement with Mirziyoyev, the political situation remains tightly controlled.

Over the past decades, the situation has occasionally erupted, most seriously in 2005, when mass protests broke out in the city of Andijan. They were brutally put down, resulting in the deaths of several hundred people.